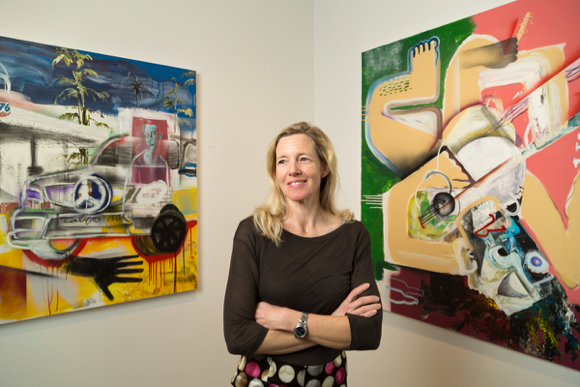 Growing up in Germany, Katharina recalls “being surrounded by art and being dragged to museums.” “My mom had an eye for art and I always had opinions,” she says.

When encountering a road block while running the coffee company, she’d wander to a nearby art auction house. She bought her first piece of art by a then not well-known Japanese artist who painted with his feet while dangling from the ceiling. “All the smeared paint showed me how to look at obstacles from different angles,” she says. “It was a way to solve problems.

“And from that time on, I was into art. That artist became famous, so I sold the painting for much more than I paid for it. It was also the first of what became my art collection.

“For me, art has to be contemporary and have a meaning. What is the story behind the painting?” 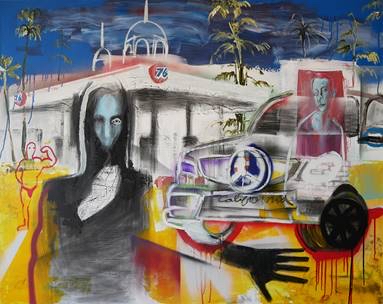 Through January 30, Art Ventures is exhibiting works by “Joy” Jongmin Kim, a self-taught, mixed media painter based in New York City. He captures  moments from his daily life and travels, recreating the stories on canvas.

Joy attended the artists-in-residence program in St. Helena sponsored by Art Ventures. Gordon Studer, Director of the residency adds; “He paints from what’s around him — people and places — but puts them in a surreal world.  I believe Hotel California (pictured above right) is image from a late night drive in the area — again a joke about what we call the residency “Hotel California.”