Menlo Park family gets caught up in World Cup fun in St. Petersburg 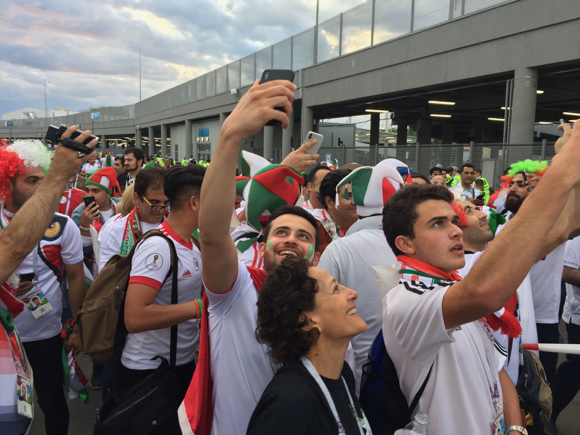 Emails Mitchell: “We’re in St. Petersburg for a week, but we just get to see the one game which miraculously Iran won in the last minute. Iran hadn’t won a single World Cup game since 1998.

“It’s the closest the three of us have been able to get to Iran as a family. I love this shot of Luca and Donia in the crowd after the match.

“Iran plays Spain on the 20th and we’ll watch that one on TV in Latvia.

“Donia’s book [The Last Days at Café Leila] is doing very well in Italy and comes out in Germany in two weeks. It’s receiving a great deal of pre-release reviews – 205 reviews already!”

Adding on Facebook, he wrote: “The World Cup is such a fascinating festive gathering. The weather was perfect and many people came in costumes. We met Iranians from lots of different countries — Sweden, UK, USA, Germany, Russia.”

Note: Donia left Iran in 1978 when her parents’ lives were threatened by the Islamic Revolution. Her mother was an outspoken women’s rights advocate and former member of parliament. Advised not to return to Iran, the family settled in the Bay Area.

What a thrill of a lifetime for you all to be there! Thanks for sharing your touching story.