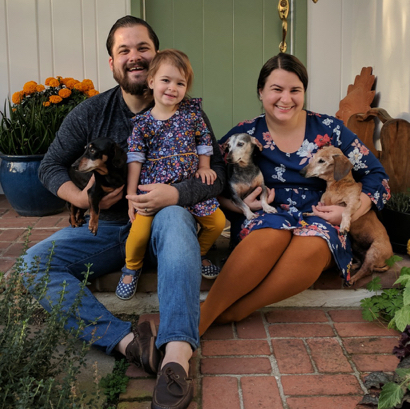 Update: The Willners have now raised over $20 million of a end of June.

It was the photo of a young girl at the border about to be separated from her mother that caught Menlo Park resident Charlotte Willner’s attention. She decided to take action, and along with her husband Dave and friend Malorie McGee, started a fundraising campaign on Facebook for the Refugee and Immigrant Center for Education and Legal Services (RAICES) last Saturday morning (June 16) with a goal of raising $1,500, the minimum amount to cover bond fees.

“Regardless of political party, so many of us are distraught over children being separated from their parents at the border,” said Charlotte. “We can’t all be on the frontlines to help these families, but by supporting RAICES, we’re able to do something that takes less than a minute, and collectively has an impact.

“When we all come together in community efforts like this, we can find an antidote to the feelings of helplessness. This is just the start though, and donating is the easy part, so our hope is that people continue to be hungry for information and get involved.”

The campaign has been so successful that Facebook had to update their product to allow for more giving because the previous cap was $5 million. “Facebook only permits you to set one beneficiary of a fundraiser, but there are other amazing organizations out there that also need support, including Texas Civil Rights Project and the Florence Project,” said Charlotte.

This wouldn’t be happening if these illegals were turned back at the border and sent back to the countries they came from for their own countries to care for. Stop spending American taxpayer dollars on illegals!!!

It sure didn’t take long for MP to jump on the “save the children” BS campaign! Where were the Trump haters when Barry Soltero had the little darlings locked up in dog cages back in 2014? Where were the when Soltero lied about the children need to return to they country and not cross the border illegally, like they do falsely claiming bogus “asylum”. Shut your welfare pie holes!

Trump has done so much damage, in so many ways, to people and institutions so many people hold dear, that people are hungry for the chance to fight back in a meaningful way. We need more like this.