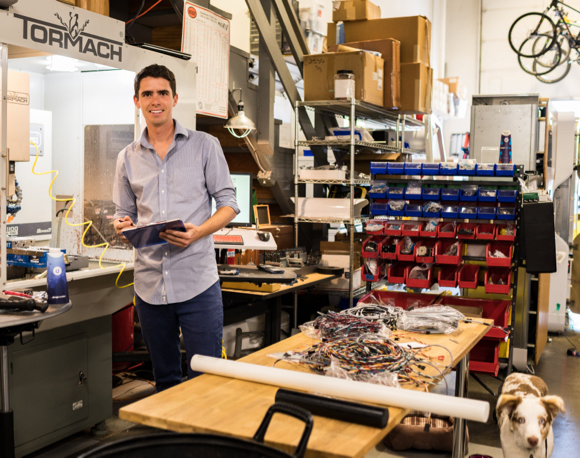 Scott Edwards, CEO (pictured top in the garage) of the startup Dropwater, cites some sobering statistics about the need to replace plastic water bottles with sustainable, eco-friendly alternative: “In 2015, there were 50 billion single use bottles used in the U.S. Stacked end-to-end, they’d go around the earth 253 times. Alternatively, that’s a 500-feet wide raft that stretches from California to Hawaii.”

But to Scott and his team, the issue is more than discarded plastic water bottles. It’s the ancillary effect of the cost getting the bottles to the consumer in the first place, often transporting water from distant places via highways and shipping. 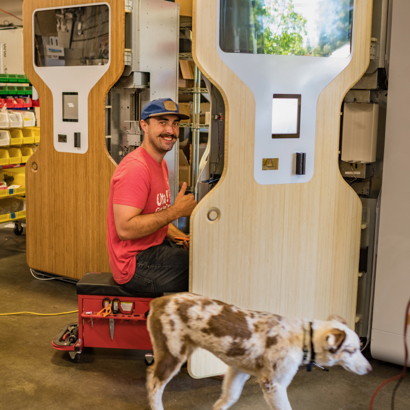 Their solution: bottle water where it is sold in packaging that is compostable or recyclable — depending on location — at kiosks they call Drop Stations. (Team member Marc Rauschnot is pictured in front of a kiosk.)

Scott, who led the robotics team at Pinewood School, studied industrial technology and packaging at Cal Poly, and Dropwater has evolved as the the result of his senior project at college. “Initially I wanted to make a machine that served re-useable bottles,” he said. “Consumers could return them to any other station. But people didn’t like the idea of sharing bottles, so we changed to compostable bottles.”

Dropwater received seed funding from Tim Draper and is now getting ready for Series A. Earlier this month it received a $25,000 award from Pipeline H2O.

The company will be installing two kiosks at San Jose Airport in the near future and has set a goal of 100 installations at airports and college campuses within the next year.