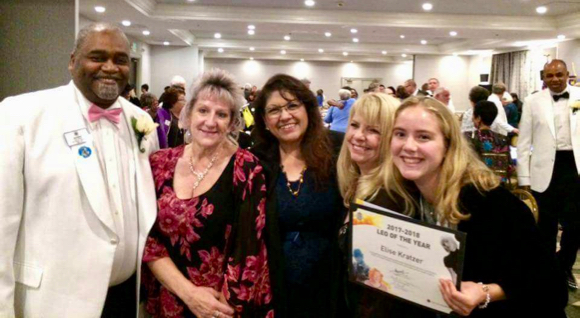 The Leo of the Year Award “recognizes a Leo’s outstanding leadership skills; superior record in implementing successful service projects; identifiable contributions to the development and growth of the Leo Club Program; distinction in community/school activities outside of Leo commitments; and high ethical standards and personal integrity.”

Elise received the award at the Invocation of the Lions District 4-C4 Governor Lydia Taylor-Bellinger and officers at the South San Francisco Marriott Hotel on Friday, August 10. Past District Governor Mario Benavente and Past International Director Dr. Patti Hill presented the award to Elise in front of the 209 Lions and guests in attendance, including Elise’s main supporter, Lion Marta Loewen, President of the Peninsula Veterans Lions Club.

Elise was awarded with a signed certificate and letter from LCI International President Gudrun Yngvadottir, along with a medal engraved with her name.

Elise founded the Menlo-Atherton High School Leo Club, founded and is the President of the Leo District 4-C4 (comprised of the 17 Leo Clubs in the SF Bay Area),and appointed to serve as the Leo Advisory Panelist for Constitutional Area I (representing the United States, Affiliates, Bermuda, and the Bahamas) for two fiscal years (July of 2017 – July of 2019).

Elise you are great,beautiful young Leo soon to be a Lion. I would not be surprised if you became the President of Lions Inernational Clubs. I am so blessed to have known you and hope to see the day you are “crowned”. If not on this earth, I wish from above. “WE SERVE”
Lion Sandee