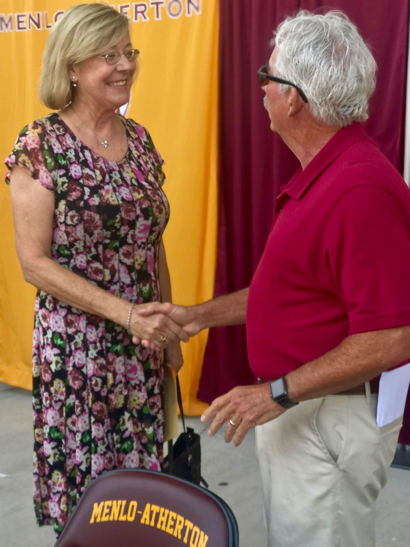 The 1965 Swim Team and the 1985 Boys Soccer Team, along with seven individuals, will be inducted in the Menlo-Atherton High School Athletic Hall of Fame at its 10th annual banquet on October 13, announced co-Athletic Directors Steven Kryger and Paul Snow on the M-A campus yesterday afternoon.

Coached by Bob Gaughran, the 1965 Swim Team included 1964 Olympic Gold medal winner Dick Roth and All American freestyler Russ Kidder. It was undefeated in dual meets. At the HOF press conference, the team was represented by Menlo Park resident Dennis Nugent (pictured above with Sally Longyear).

In remarks, Dennis recalled that he had an opportunity to coach with inductee Rick Longyear (1982-2018 Water Polo & Swim Coach) in the spring of 1998. “He was a no nonsense coach, and the kids had to work hard. They respected him. We were lucky enough to have talented students and talented athletes.”

About the 1965 swim team he said: “Coach Gaughran came up with an unusual line up to upset both Palo Alto High School and Santa Clara High School. The latter had not lost many dual meets under legendary coach George Haines. Future Olympian Mark Spitz was on the Santa Clara team.”

Coached by another legendary coach, Marino Mangiolo, who is also being inducted posthumously as an individual, the 1985 Boys Soccer team had a storybook year. While they finished in only third place in the regular season, in the CCS playoffs the team beat Prospect and Santa Teresa, setting up a CCS final versus Branham. Behind by two goals, with nine minutes left, late goals by Ken Taylor and Tucker Scott tied the game. An overtime goal by Nacho Naverette gave the Bears their first ever CCS title for boys soccer. 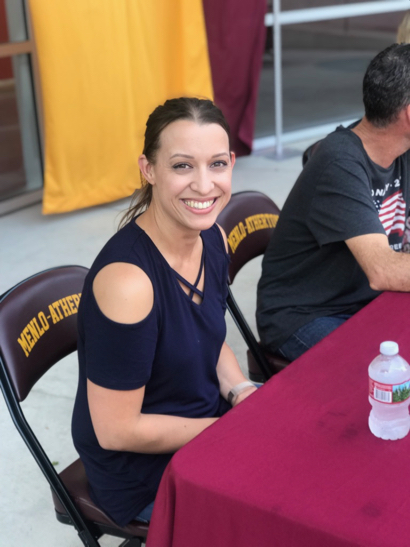 Sally Longyear agreed her late husband, Rick, was the “quintessential teacher and coach,” as Paul Snow had referred to him in one of his obituaries. She shared the luminaria that burned brightly at the recent Menlo Park Relay for Life which she participated in, raising over $40,000 in his memory.

Casey (pictured above right) recalled how challenging softball was, even though she’d been pitching since she was 11. “You quickly learn that you’re not going to win every game,” she recalled. “It certainly got my competitive juices flowing!”

Casey could also swing the bat. She averaged over .300 during her softball career. And when not playing, she cheered other M-A teams on as a varsity cheerleader!