Bob Gaughran coached water polo and swimming at Menlo-Atherton High School for just seven years, ending his tenure almost 50 years ago.  So, it’s a testament to the man that three dozen or so of his former players gathered at the M-A pool yesterday on the occasion of his upcoming 80th birthday, a celebration organized by Jim MacKenzie.

Not surprisingly, tales were told. One of the most memorable was the afternoon that Coach Gaughran turned the water on to fill the pool — and forgot to turn it off. The result was a flooded football field. That was salt on the wound to football coach Art Boettcher, who Bob had already “stolen” a number of players from, including Bill Ready and Jim. 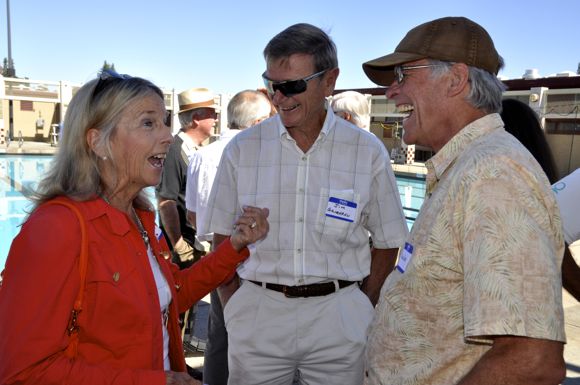 “I got a call  from Bob Ayers [head of PE department] who said I better get over here because the Superintendent was on his way to campus in a canoe to fire me,” recalled Bob.

That didn’t happen and Bob went on to notch 18 sport titles before leaving in 1965 to take a coaching position at Santa Ana College. But yesterday his heart was in Atherton.

“Being here at M-A was one of the best coaching experiences of my career,” he said. “I was blessed with really great athletes.” 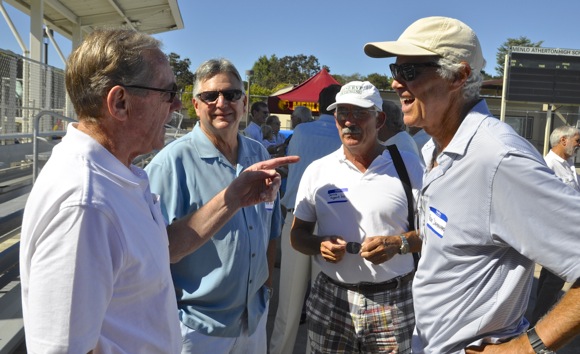 Retired College of San Mateo swimming and water polo coach Rich Donner, who is a Sequoia High School alum like Bob, was an assistant coach for Bob at M-A while doing his student teaching. Most of his stories were more for laughs than veracity, but there was credibly when Rich recalled an incident when they were both at a Block S membership meeting at Sequoia: “A somewhat timid guy came up saying he wanted to become a member. Bob asked why, to which the kid replied ‘to serve my school.’ Bob shot back: ‘Then why don’t you go work in the cafeteria!'”

The returning athletes and their coach got a tour of the current athletic facilities from M-A Athletic Director Paul Snow, most of which, including the pool, had been rebuilt since their era. Head custodian Brien Oliver continued the tour, stopping at new library and Performing Arts Center. 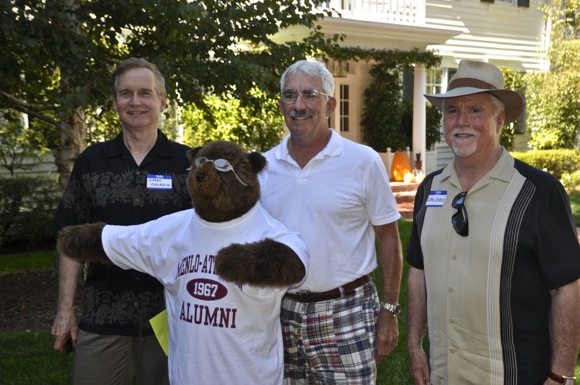 And while name tags were required to sort out who was who some 50 years after playing together, the consensus among attendees was that Bob had changed the least among them. “OK, we are all gray or bald, but Bob looks pretty much like he did all those years ago,” observed one former athlete. “Today, it’s hard to tell the coach from his players.” 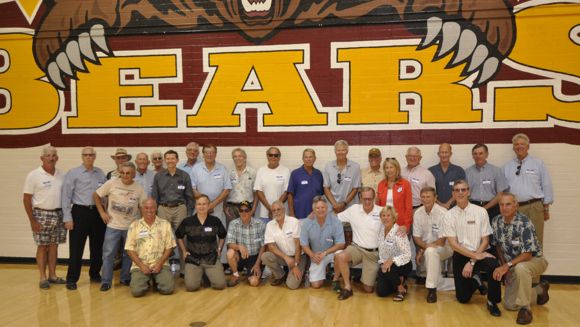 –Tod Spieker, who hosted a lunch at his home after the campus event, makes a point to Pete Damsgaard

-Three of Bob’s water polo/swimmers — Gordy Gourdin, Dennis Nugent and Greg Burns, none of whom are the class of ’67 — arrive at Tod Spieker’s house for Bob’s party. Note: Tod is class of ’67.

Great article. You covered it beautifully and was great to see you and Dennis there!!