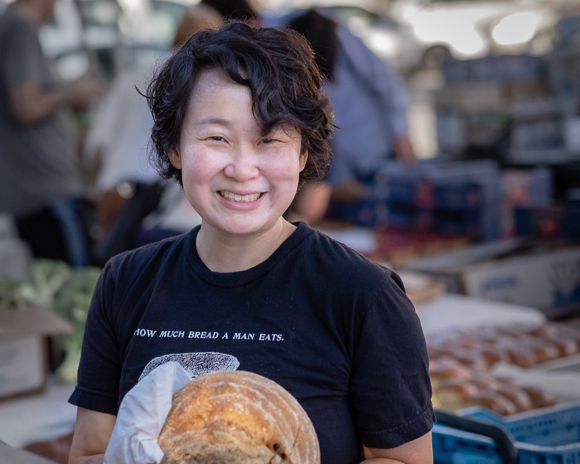 At last, there’s bread to buy at the Menlo Park Farmers Market. Very good bread baked in a Willows neighborhood kitchen that’s been certified by the County of San Mateo. The baker is Tian Mayimin, who we sat down with on a recent Sunday after what she’d brought to the market was sold out (as happens every week).

The road to Tian becoming a baker is not a straight one. “After law school, I became a criminal defense attorney in Washington D.C.,” she explained. “Doing that I got to learn many aspects of my clients’ business, many of whom were making a physical product.

“I started thinking about what I really wanted to do. While I loved my colleagues at the law firm, I wasn’t inspired by my every day work. More and more I was attracted to the idea of making products. I like interacting with people and being involved in the community.”

Her first products were a line of cold-pressed juices that she produced and sold in Shanghai where she lived for five years. It was during her time away that she became engaged to Harvard classmate Dan Yamins. Soon after they married, Dan got a job at Stanford, and they moved west.

That’s when the baking began, first for family and friends using a starter batch that she got from her brother. Slowly, Little Sky Bakery came into being with Tian taking orders online with free delivery in Menlo Park and Palo Alto, and securing a place first at the seasonal Palo Alto downtown market, then the Portola Valley market on Thursdays, and finally Menlo’s market in July.

On Sundays, people line up for the popular olive oil and orange challah, raisin walnut and olive rosemary breads, along with whatever else Tian has baked. Customers can sign up on her website to receive emails about what she’s bringing to market each week.

The next step is finding a retail space, and her first choice is locating one in Menlo Park. “I think the community here has a huge pent up need for good bread,” Tian said. “So, I’m actively look for retail space where I can both bake and sell. There are so many products I want to make!”