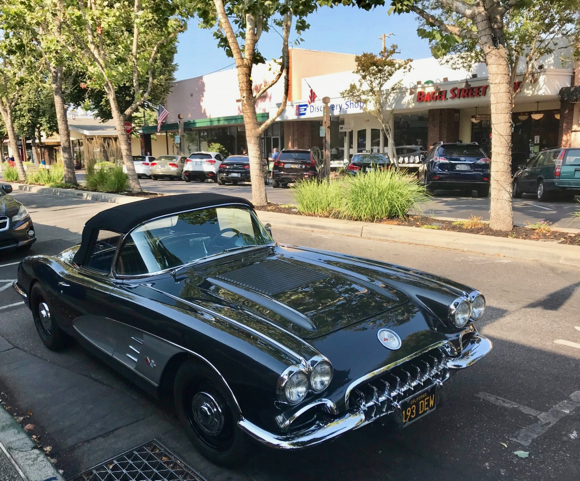 Update: We were incorrect! Paul Pollock, the Corvette Story Webmaster – http://corvettestory.com – tells us it’s a 1958 Corvette. See his full note in the comments section.

At least we think it’s a 1956 Chevrolet Corvette convertible that was spotted parked on Santa Cruz Avenue this morning in downtown Menlo Park.

A quick Wikipedia search says the ’56 and ’57 models were “near-twins,” so it could be the later year. Maybe a car geek can set us straight.

Either way, it was in beautiful condition, so much so that we’re showing two views.

And here’s what Wikipedia says about the ’56 model: “There was no doubt Chevrolet was in the sports car business with the release of the 1956 model. It featured a new body, a much better convertible top with power assist optional, real glass roll up windows (also with optional power assist) and an optional hardtop. The 3-speed manual transmission was standard. The Powerglide automatic was optional. The six-cylinder engine was gone. The V8 remained at 265 cu in (4.3 L), but power ranged from 210 to 240 hp (157 to 179 kW).” 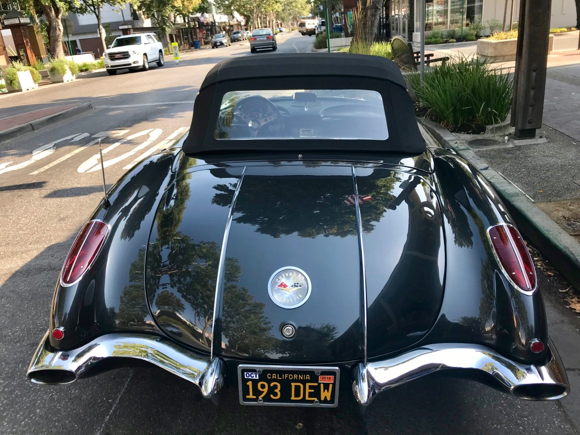 The car shown is a 1958 Corvette. This can be determined by the “washboard” louvres in the hood and the chrome spears on the trunk lid. both items were exclusive to 1958. More information is available at http://corvettestory.com