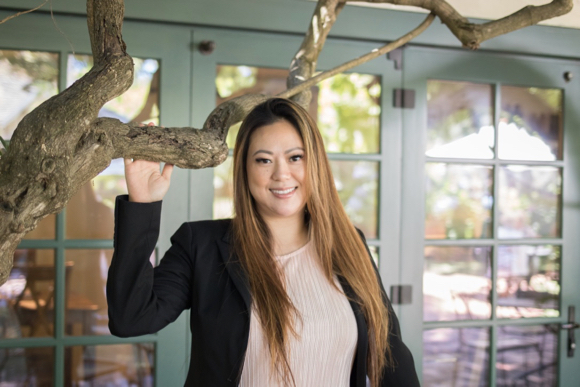 In the decade that Tiana Wong has been Events Manager at the Allied Arts Guild in Menlo Park, she’s seen half a dozen cafes come and go on the property. “I observed what worked and what didn’t,” she said matter of factly.

So when the space became available again at the beginning of the year, she decided that rather than find a new tenant from the outside, she’d operate the space herself. The result is Cafe Wisteria, a fitting name for a restaurant that’s graced by old and gnarled wisteria.

In putting the menu together, she drew from some of the favorites from when the Palo Alto Auxiliary served meals for what was then called the Allied Arts Restaurant over a period of 70 years. Many of them were captured in the cookbook, Tastes, Tales and Traditions, published in 2005. “For example, there’s the Chicken Cranberry Salad and the Grilled Cheese,” said Tiana. “Others we’ve used as inspiration and added a twist, such as the Grilled Peach and Brie Panini.”

Today the menu also includes a good assortment of starters, salads, sandwiches and entrees, such as Watermelon Caprese Salad and Waldorf Chicken Salad Croissant pictured here. The community has embraced this latest occupant of the historical space; Cafe Wisteria  was voted best new restaurant in the Almanac News 2018 poll. 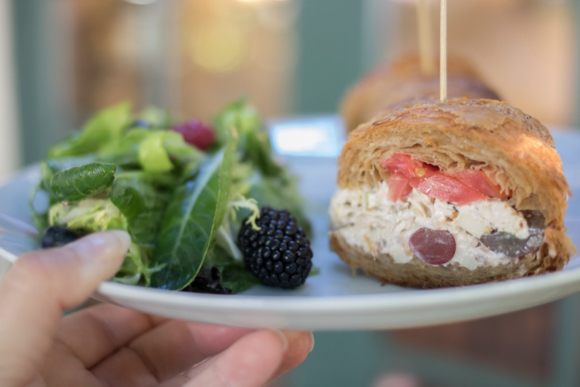 That Tiana ended up in event — and now restaurant management — is not what she expected when she came  north from the southland to attend UC Santa Cruz, where she got a Masters in History. “My plan was to go to law school,” she said. “But I’d worked at a hotel when I was in grad school and came here soon after when the Allied Arts Auxiliary hired me. I celebrated my 10th anniversary in February and have been involved in all kinds of events, parties and weddings over the years.

“It’s been a great way to connect with the community, and I’m hoping that Cafe Wisteria will further cement that!”