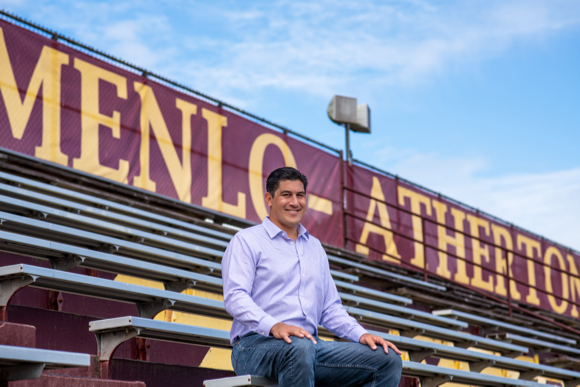 While Shaun Paga was born 6,500 miles away in New Zealand, his roots in Menlo Park run deep. Moving to the United States when he was nine years old, he attended Encinal, Hillview and Menlo-Atherton High School. He married his high school sweetheart, and their three children attend La Entrada and M-A.

At M-A,  he excelled as a linebacker, earning first team Peninsula League as a senior. His accomplishments at M-A will be highlighted this Saturday evening when Shaun is inducted into the M-A Athletic Hall of Fame along with the 1965 Swim Team and the 1985 Boys Soccer Team, and six other individuals.

“It’s safer for the players, and many NFL teams are moving to that approach. [M-A football coach] Adhir [Ravipati] is pretty advanced in his thinking about player safety.”

M-A’s football team was NorCal champion in 2016, and the program is 4-2 this year with losses only in non-league games. One of those non-league games was Valor Christian, the #1 team in Colorado. It was the first time M-A’s football team traveled out of state for a game, according to M-A co-athletic director Paul Snow, who added:  “The hosting school in Colorado basically covered our airfare, and the M-A Football Association fundraised for the rest (hotel, ground transportation, food, etc.). I’m sure they’re actually still fundraising for it.”

Shaun’s son plays defensive end on the team, and last week they won decisively against unbeaten Terra Nova, 30-8.  Ranking 16 on the Chronicle Top 25 football list, Friday night is a home game against Menlo School. At half-time, all the 2018 Athletic Hall of Fame inductees who are in attendance will be honored.

In addition to playing football at M-A, Shaun wrestled for legendary Coach Parks, who was also the strength coach. “The old weight room was right here where the stands are today,” he said while getting his photo taken. “Like so many other athletes who played at M-A, Coach Park had such a lasting positive influence on me.”

Looking to the future, Shaun is excited that M-A will be adding rugby to its athletic line up next spring. “I enjoyed playing rugby at Cal and glad it will be offered here now.”

A wonderful tribute to a Great Husband, Father, and contributor to the Community and to his Alma Mater!

Shaun will be a natural working with the kids in the athletic program at M-A.

He and Kristen have formed a close, wonderful family, and we’re happy to have them return to this area.