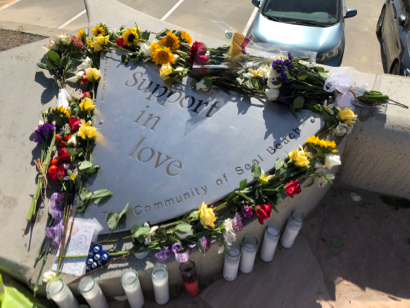 The event, organized annually by Michele’s older brother Rooney Daschbach and his wife Claire, is a swim held in the ocean near the Seal Beach Pier just feet away from the memorial plaque installed by the City to remember those lost in the shooting on October 12, 2011.

The Swim is followed by a taco party at the Daschbach home in Sunset Beach. The swim is open to anyone who wants to participate. This year, Rooney asked that donations be made in Michele’s memory to the Seal Beach Animal Care Center at 1700 Adolfo Lopez Drive, Seal Beach, CA 90740.

Michele was the youngest of six Daschbach children who grew up in Atherton. She was living in Seal Beach with her husband and three children at the time of her death.