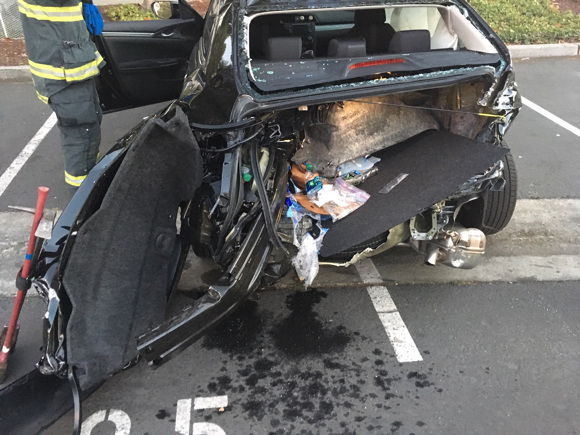 A southbound Caltrain express commuter train clipped a vehicle that had not fully cleared the railroad tracks at Ravenswood Avenue in Menlo Park just after 6:15 pm Tuesday, Oct. 23.

Menlo Park Fire Captain John Wurdinger and the crew of Engine 6 arrived on-scene and found a woman standing outside of her heavily damaged brand new black 2018 Honda Civic, excitedly talking on her cell phone about how she had almost just been killed by a Train.

She then explained to Firefighters how she was caught in backed up traffic on West Bound Ravenswood between El Camino Real and the tracks when the rail signal activated warning of an approaching tTrain. Despite honking her horn so she could pull forward, no one moved.

Witnesses described the vehicle as being thrown into the air on impact and landing parallel next to the rail tracks after being struck by an Express Train traveling at 78 miles per hour. The tTrain was not damaged and did not stop.

She then told Firefighters that she thought her vehicle was ok and drove off only to circle around the block because her car didn’t “feel right”. Battalion Chief Dan Coyle said “the entire back of the vehicle just past the rear tires was almost completely sheared off, shattering the vehicles rear window and activating the passenger side air bags on impact. It’s amazing the car was still drivable and she wasn’t more severely injured or even killed”.

The woman in her 30’s was the only one in the vehicle at the time of the accident and complained of back and neck pain. Firefighter Paramedics treated her at the scene, and she was transported via AMR Ambulance to Stanford Hospital for further evaluation.

This at grade crossing is notorious for many significant near miss and sadly tragic accidents involving the loss of life,” said Fire Chief Harold Schapelhouman. “It’s a poorly designed crossing, exacerbated by people who are in a hurry and not paying attention…The train can’t swerve to avoid an impact, and if the Express is coming through it takes about a mile for it to slow down and stop because it’s going about 80 miles per hour. This should have been improved years ago, but the debate on how to fix this crossing has gone on for decades.”

Sure hope it was a Tesla……batteries would have leak into the environment!!!