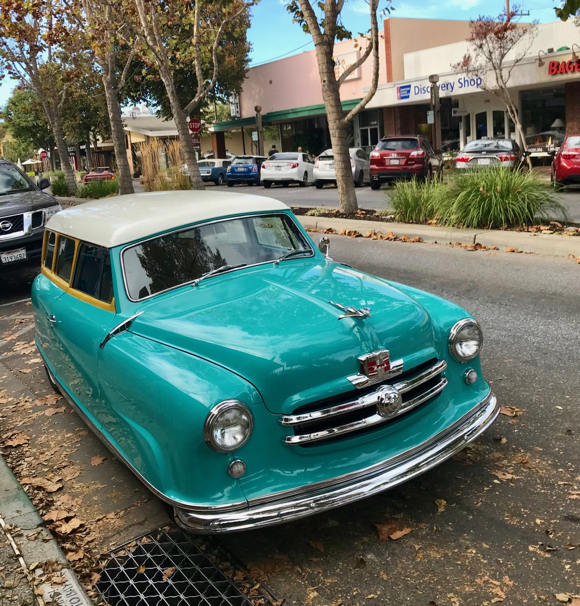 Update: InMenlo reader Serena Torrey Roosevelt emailed: “It’s not a metropolitan. I think this is the Greenbriar wagon.”

We spotted this beautifully-restored Nash twice today — first parked on Santa Cruz Avenue near the farmers market and then being driven on Oak Avenue going west.

We weren’t the only ones who stopped to take photos — it was gathering a mini crowd. We’d love to locate the owner to learn more about the car and how he or she came to own it. If you know, please tell us: tips@inmenlo.com. 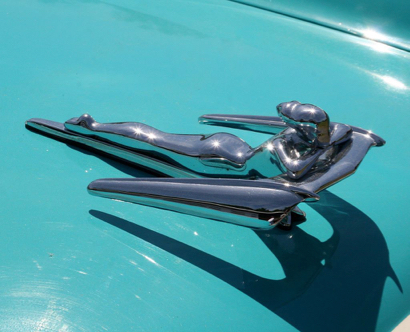 We are old enough to remember Nash automobiles in its later years of production, and think this one is a Metropolitan based on the hood ornament (right).

Here’s more about the Metropolitan (if indeed we are correct – if not, please do correct us!) according to Wikipedia:

“The Nash Metropolitan was an American automobile that was sold from 1953 to 1961.

“It conforms to two classes of vehicle: economy car] and subcompact car. In today’s terminology the Metropolitan is a “subcompact”, but this category had not yet come into use when the car was made. At that time, it was variously categorized, for example as a “small automobile” as well as an “economy car”.

“The Metropolitan was also sold as a Hudson when Nash and Hudson merged in 1954 to form the American Motors Corporation (AMC), and later as a standalone marque during the Rambler years, as well as in the United Kingdom and other markets.”