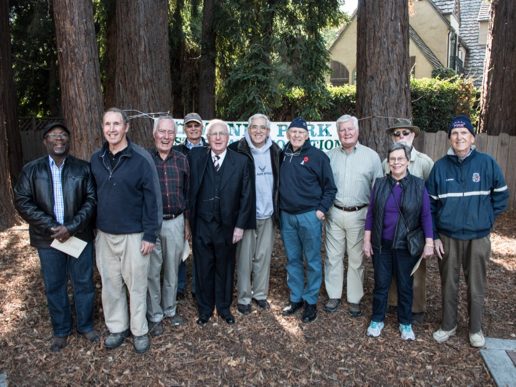 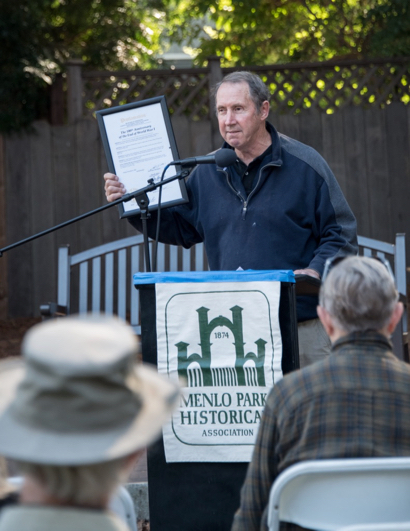 Locals, including veterans (pictured top), gathered at Fremont Park today to commemorate the end of World War I 100 years ago today — and the 80th anniversary of the Park itself.

At the event, organized by the Menlo Park Historical Association, Bo Crane (pictured right) talked about how 20 years after the Armistice on Nov. 11, 1911, Fremont Memorial Park — the initial name —was dedicated by the City of Menlo Park.

Explained Bo: “Jacob Frederick Carl Hagens, a San Francisco corporate executive in the 1930s, was key to the creation of the Camp Fremont Memorial Park at the corner of Santa Cruz Avenue and University Drive. 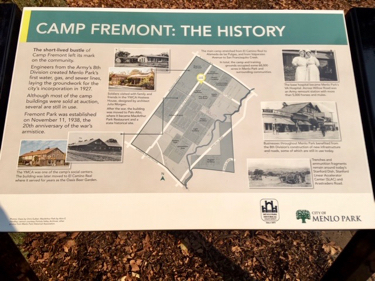 “When he discovered that the vacant lot on the corner was to be used for commercial purposes, he tried to get the City to purchase the property. When the City failed to do so, Hagen formed a private group to buy the land, putting up most of the funds himself.

“Hagen also gifted Menlo Park a library and allowed part of a building he owned to be used as the City Hall. He was the largest donor in town to the Red Cross.”

Also unveiled today are two new storyboards that tell the story of Camp Fremont in Menlo Park, which have been installed at the Park’s entrance.

Photos by Robb Most (c) 2018 with exception of photo of storyboard, courtesy of Jim Lewis, MPHA

Correction to Carl Hagens name. Hagens and not Hagen.