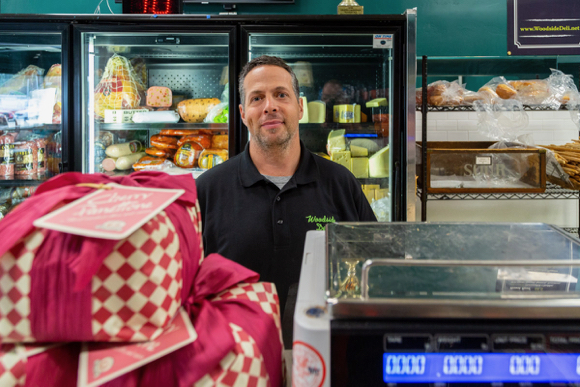 New Woodside Deli owner Kyle Vogel has a good problem: There’s a lot of pent up demand for sandwiches and other offerings after a nine month closure. That means the lunch rush is extending all the way to 3:00 pm.

“It’s a bit like a tidal wave breaking,” he said with a smile.

Kyle, a Menlo Park resident, says it’s always been in his head to have a place like this. “I love food and understand the basics of the business,” he said. “People order and get their food and take it with them.”

He’d looked into buying a deli or renting space to build one. At one point he was thinking about relocating to another part of the country, but noticed a Help Wanted sign at the Deli.

“I thought, ‘I’ll work on the inside and see what it’s like,'” he recalls. “Clearly, I wasn’t the usual teenage part-time worker.” 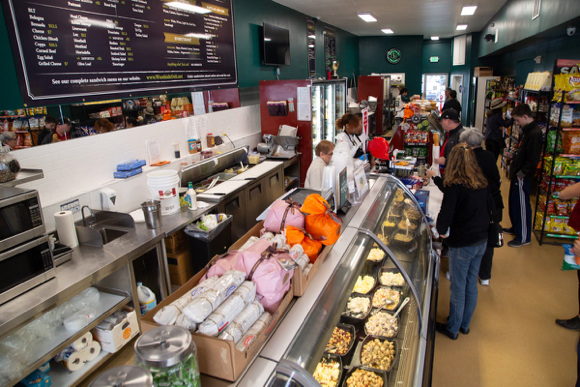 According to Kyle, Woodside Deli has been around for about 60 years, and, until he took over, owned and run by Barbara and Dan Gallinetti for 48 of those years. “They’re the ones who built it into what it is today,” he said.

During the time he worked there, the Gallinettis weren’t interested in selling, so Kyle moved on, although still stopping by for lunch. He learned that the Gallinetti children did not want to carry on the business, and when the couple decided to retire, he bought the Deli. To Kyle’s delight, most of the staff stayed on.

“On the very first day, a health inspector happened to stop by,” Kyle recalled. “The change in ownership resulted in a full inspection, and not surprisingly a number of things needed to be brought up to code. We went dark in January of this year and re-opened in October.”

In addition to a brand new kitchen and floors and the addition of ADA seating, Kyle has modified the ordering system to be more efficient and added online ordering. The Deli’s famous sandwiches like The Godfather are all available along with sliced meats and cheeses and Italian specialties, like Barbara’s raviolis.

“She made the ravioli filler for 48 years,” he said. “There was no recipe. Thankfully, she showed me how to do it step-by-step so it remains the same.”

When Kyle re-opened he sensed some of the long-time patrons were a bit anxious. “I assured them, ‘The food hasn’t changed, we have.’ I’d give them my card and say, ‘Whatever you need we can get it for you. Just let me know!'”