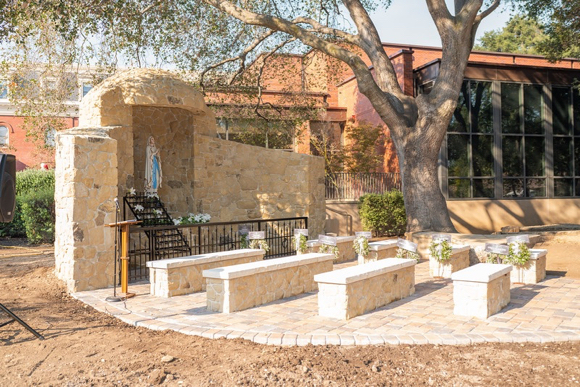 Earlier this month there was a rededication ceremony of Our Lady of Lourdes statue/grotto that had been “hidden” away on the Sacred Heart School upper campus for some time. SHS alum Laura Pitchford provided InMenlo with some background:

“The original Virgin (she is the same but with a facelift!) was located outside of the Siegal Building which was torn down to make room for a new building. The Grotto, which was dedicated by alums in the late 1800s, needed to be moved. The staff took it apart rock by rock and reassembled it in the current location.

“[Head of school] Rich Dioli thought the quickest way to complete the project was to copy the grotto at Notre Dame in South Bend. He then called upon two Notre Dame/SHS families to help with fundraising.”

At a visit to the Grotto last week, Sister Nancy Morris, who Laura profiled on the occasion of her 90th birthday last year, filled in some historical details, explaining that the Folger family gave Sacred Heart the statue in 1903. “It was really hidden on a part of campus that wasn’t developed at the time,” she said. “We referred to it as the Lourdes forest.

“When I was head of school — and Sacred Heart was all girls — we’d parade over there on her feast day each year, the girls in white veils, all leaving flowers behind. Now that the school is co-ed, that kind of thing probably can’t happen. Alas, at a time when there is so little reverence in the world.”

The Lourdes Grotto at Sacred Heart is one of many scattered around the United States and the world. Lourdes, France, rose to prominence in 1858 when the peasant girl Bernadette Soubirous, who was later canonized, claimed to see Marian apparitions. The city with the Sanctuary of Our Lady of Lourdes became one of the world’s most important sites of pilgrimage and religious tourism. There people who are ill are reputed to be miraculously healed by Lourdes water.

“Lourdes is perhaps the most famous holy site in the world,” said Sister Morris. “There are hundreds of crutches, etc. stacked near the grotto, symbols of cures. The church is beautiful, and the waters of Lourdes are distributed in small bottles to those who need them (I have one).”