Catching up with the duo behind Camper in Menlo Park 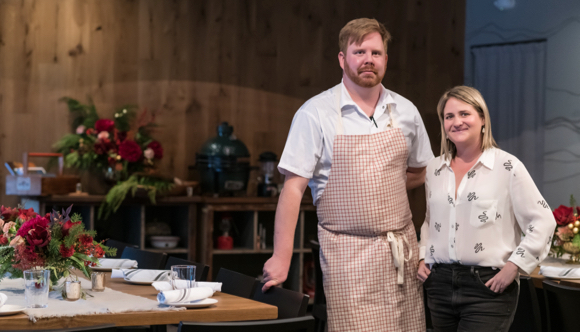 With Camper in Menlo Park three plus months old — and now open for lunch Tuesday through Friday — we stopped in to talk with managing partner Logan Levant and chef/owner Greg Kuzia-Carmel.

The two had met when Greg was cooking a private dinner for one of Logan’s friends. “I was struck by his great personality and how good the food was,” she recalled. “We started taking and discovered we have similar goals on what we wanted to accomplish.”

Logan grew up in Southern California and owned Buttercake Bakery there for a decade. She discovered Menlo Park five or so years ago when her best friend moved here and she came to visit. “I love that it’s a real neighborhood,” she said.

She now lives just blocks from Camper in a space shared with her two Newfoundland dogs. (Alas, we failed to ask if they get frequent doggy bags.)

Both Logan and Greg commented on the fact that the space that is now Camper has history, initially as Marché and then as LB Steak. “People come in and say they’ve celebrated big moments in their lives here,” said Logan. “That’s been cool.”

Before opening Camper, they’d been warned that Menlo Park was “sleepy,” so it’s surprised them both that they’re getting a late night crowd. “We’re excited to stay open to meet that demand,” said Logan.

Both acknowledged that they’re continuing to get their footing, adjusting menus, and addressing the noise issue by adding bafflements with other plans in the works. They’re working on expanding private dining, using a room that can be adjusted for size at the back of the regular dining room (where they were photographed).

“We exist as a living breathing organism,” said Greg, whose chef credentials include Per Se in New York and Cotogna in San Francisco. “We want things to have a personal reference point and to offer an experience that communicates our spirit.”

Of special note: While Camper is normally closed on Sundays and Mondays, it will be open for dinner on Christmas Eve, Monday, Dec. 24, and New Year’s Eve, Dec. 31.