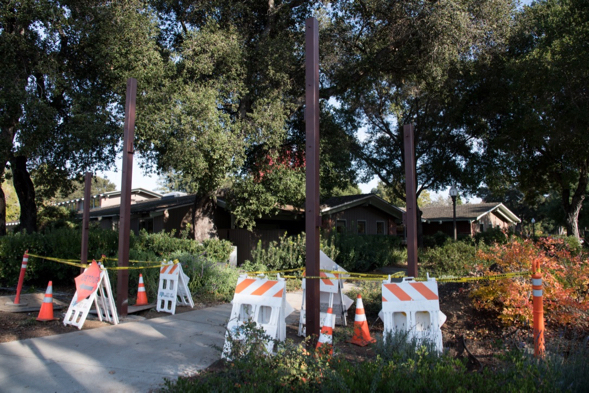 The Menlo Gates project, long in the planning and fund raising, has finally begun construction, though funding is remains short $15,000 of the final goal.

Construction is proceeding. The steel cross beams have been placed and the redwood covering comes next, weather and holiday permitting. By the end of the month, some or all of the wood should be in place. The final items, such as placing the plaque, landscaping, etc. may take a few weeks longer to wrap up.

Here is the story behind the re-construction of San Mateo County’s oldest civic landmark. 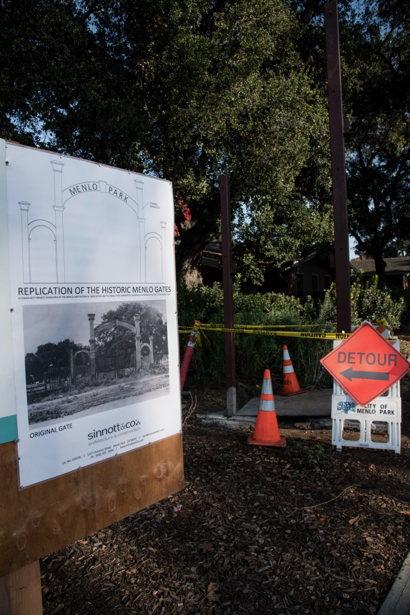 On September 9, 1850, when California became the 31st state, the southern boundary of San Francisco County was established at a narrow and deep channel of San Francisquito Creek that cut across the Peninsula flats about 30 miles from the city’s busy downtown. That creek channel had been site of camps when the Portola and Anza expeditions explored the area when the region was New Spain, still owned by the king in Madrid.

The land became Mexico’s through it’s independence from Spain and then part of the United States in 1848 following it’s war with Mexico. The discovery of gold that year became the rush of 1849 and brought the world to San Francisco Bay.

One such adventurer was Denis James Oliver, an Irish immigrant and a recent paint merchant from New York City. He arrived with his business partner, John McGlynn, having married John’s slightly younger sister, Bridget, both Irish immigrants who had immigrated as family members earlier. Within a couple years, Denis and John were joined in San Francisco by Bridget and her younger brother, Daniel.

Around 1853, Denis Oliver and Daniel McGlynn journeyed south of the city to a desolate oak-studded plain, seeking ranchland opportunities. Almost to the creek, they acquired available property along the main road. A railway had been surveyed to run parallel on the other side of the lightly traveled road. To celebrate their new ranch, they two had a gateway constructed with a redwood archway on which Denis had painted MENLO PARK, in honor of a delightful village near his hometown of Galway, Ireland.

The railroad didn’t happen as fast as many had hoped. Only stagecoach lines traveled the bumpy route to San Jose. The partnership ended, and the two went their separate ways. The railroad finally arrived in 1863. While the bridge was being built over San Francisquito Creek, railroad men noticed the still visible, decade-old MENLO PARK across the roadway facing the tracks. The name was chosen for the depot and later the town.

San Mateo County was carved out in 1856. The county’s main lumber shipping port became Redwood City and the county seat. Spanning each entrance of Broadway in the town are arches that famously read “Government Best by Climate Test.” Palo Alto has the tall, millennium-old redwood at old creekside camp, so recognizable from a distance that it’s Spanish name, el palo alto, became the town’s name.

But as for Menlo Park’s redwood archway, in 1922 it was struck by a reckless motorist late at night, collapsing the 70-year-old structure into a splintered heap. That leaves Menlo Park without it’s own iconic landmark.

Accordingly, a few years ago, individual members of the Menlo Park Historical Association (MPHA) formed a Menlo Gates Committee to faithfully reconstruct the Menlo Park Gate, called “Gates” because the tall, wagon-entry gate is flanked by two pedestrian gates, one for each partner. The Committee began raising funds, interested in getting as much individual and business support so that all would share in funding the building of the full-size replica Gates.

The original Gates were alongside the former County Road, just east of today’s Menlo Avenue, where Menlo Clock Works is located (961 El Camino Real). The new Gates will be at the corner of Ravenswood Avenue and Alma Street, spanning a walkway adjacent to the Menlo Park Library.

Donations for “Menlo Gates Project” can be mailed directly to MPHA, 800 Alma Street, Menlo Park, CA, 94025. MPHA would love to have as many community members and history buffs as possible participate in funding the project.

My wife & I had the pleasure of visiting
Menlo Park outside of San Francisco, California
on the 14th. June 1980, where we stayed ove
night as guests of Bill & Joan Walsh.
Bill as far as I can remember was senior vice pp
Present of a company called “Arcata” which
was a multi national company.
For the duration of our stay which was over
night , Bill & his wife treated my wife Clare
& I very well . He brought us along with his
Family to lunch at his country & golf club.
Later we had dinner at Bill’s house we really
enjoyed our visit & next morning we flew
back to Los Angeles where we where staying
with relations of my wife.