From burglars to biscotti: Getting to know Menlo Park Police Chief Dave Bertini 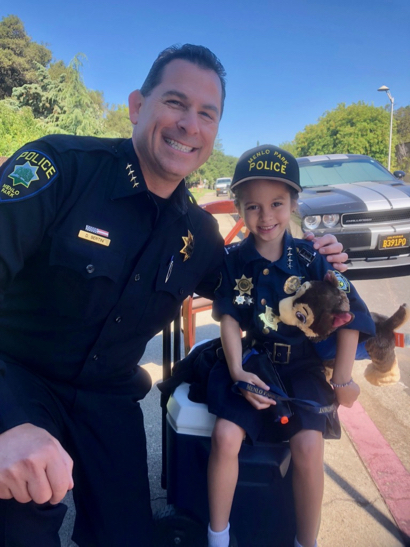 This past July, Chief Dave Bertini took over command of the Menlo Park Police Department. Chief Bertini is beloved at City Hall, where he prior served as a Police Commander in various roles, as Interim Police Chief, and even as Interim Human Services Director when the need arose. I thought Menlo Park residents would enjoy getting to know Chief Bertini a little more and asked him to sit down for this interview.

Ray: Chief, when you were a kid, what did you want to be when you grew up?

Chief Bertini: When I was a kid I wanted to be a pilot. I still to this day have a huge appreciation for aviation, both military and civilian and love everything aircraft related.

Ray: What lead you to a career in law enforcement?

Chief Bertini: When I was 15, a friend of mine got involved in the Police Explorer program in Pacifica and convinced me to come check it out. I went through the Explorer “Academy” and found that I enjoyed it a lot! I actually graduated #1 in my class. I really enjoyed riding with officers and assisting and found that I picked things up in Law Enforcement very quickly.

When I turned 18, I was still in high school but was still very interested in being a pilot so I went to go see an Air Force recruiter. I remember him saying that my grades were good, I was in good shape from playing football, but then he asked me about my eye sight. I said ‘not bad! 20/25 in one eye and 20/30 in the other’. He looked at me for a few seconds and made a fateful statement: “Well, I can guarantee you will work around planes!”

I politely declined, and when I graduated from high school, I got hired as a dispatcher and a reserve police officer with Pacifica Police Department. At 19, they seemed to like my abilities and work ethic and hired me as a police officer and sent me to the police academy, and the rest is history.

Ray: What has been your greatest day in public service to date?

Chief Bertini: It is hard to pick out one day in public service that is the greatest. I have been lucky to be able to work hundreds of great and interesting cases, especially when I was a detective. I had a nose for investigating crimes and the more complicated the crime was the more I enjoyed it.

It got to the point that while I was a Detective Sergeant in Pacifica (I had done three rotations through investigations), any case out of the ordinary would be given to me including the retrial of a double murder suspect and the bombing in 1999 in Pacifica (on which a Investigation Discovery television show episode was based). I think the greatest moments in my career thus far has been the satisfaction of giving families and families of victims closure to their cases and their heartfelt appreciation for my work.

Ray: Chief, now on top of everything else you do, you also teach? Can you tell me about your teaching background?

Chief Bertini: I have been teaching for over 20 years and aside from my work in Rotary, that is my biggest passion outside of law enforcement. I am an Adjunct Professor at the College of San Mateo, a certified police academy instructor, a State POST instructor and a national faculty member of the Josephson Institute of Ethics.

I very much enjoy public speaking and making presentations (some have said I am a “ham” but I disagree….maybe), and I truly enjoy when I am able to help students have that “a-ha!” moment when everything comes together and is clear to them.

I also have a passion for history (my Masters is in Military History), and I believe that everyone in this country needs to understand where we come from, our founding documents and the rights we all have. Recently I have presented this very subject to classes at Menlo-Atherton High School and at  Menlo School.

Ray: I suspect people are very interested to learn what your goals are for the Menlo Park Police Department in 2019?

Chief Bertini: Goals this year for the Menlo Park Police Department include fully activating the “Beat-4” team of officers funded by the Facebook Development Agreement. As of now it is only partially activated but I hope to have it fully running by the end of 2019.

We are also working on staffing a robust traffic team with four motorcycle officers. We currently have a new traffic sergeant and a motorcycle corporal and this team will help address the major traffic issues we have in Menlo Park. Another goal is to keep violent crime low, as it is now at its lowest level in over a decade, while also addressing the problem of rising property crimes, caused by several changes in state law.

Ray: Speaking of property crimes, what steps can Menlo Park residents take to protect their homes from burglary whether they’re traveling or just away from home while at work?

Chief Bertini: First and foremost is secure your home! Make sure all door and windows are locked, lights are on or on a timer, and if you have an alarm make sure it is activated.

You can also let the police department know you are on vacation and we can do “vacation house checks”. All you need to do is call the police business line at 650.330.6300 and say you would like this service. You will be asked a few simple questions, and an officer will check your premises daily.

Also, make sure you have a friend or neighbor you trust to be your contact in case of emergency, and let your neighbors know you are on vacation and ask them to keep an eye on your home.

Some other obvious steps that people sometimes overlook: Stop newspaper and mail delivery and whatever you do do not post on social media about the wonderful time you are having on vacation! Criminals have become very adept at surfing social media and can use this information to target your home.

Ray: Okay last question, and it’s a tough one. What’s your favorite dessert?

Chief Bertini: I am actually not a big dessert eater, nor am I a baker (but I do cook pretty well!). Having said that I do bake once a year, and it is at Christmas time. I am fortunate to be the holder of my Nonna’s (grandmother) famous biscotti (Italian cookie) recipe. Every year I go through bags of flour and sugar and 5 dozen eggs and bake these biscotti which I bring to the police department as a Christmas gift for everyone. Each team gets their very own box of biscotti!

Ray Mueller has served on the Menlo Park City Council since 2012; he began his second term as Mayor in December. This is the third of a series of conversations he’ll be having with experts, residents and business owners. Photo shows the Chief with appreciate girl who put together a lemonade stand for the department.