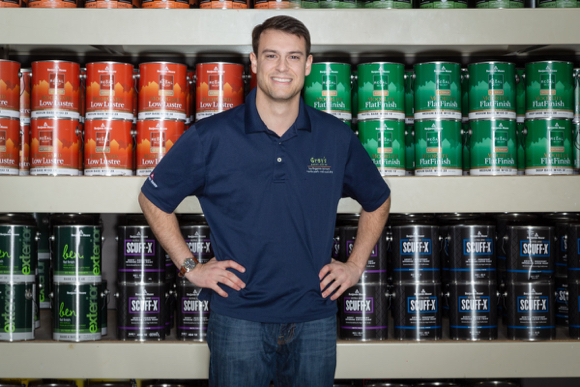 Daniel Engels has been the manager at Gray’s Paint in downtown Menlo Park for two years now. But that just scratches the surface of his involvement with the store.

“I’m the third generation of my family to be part of this business,” he explained. “My grandfather, Bob Gray, opened the first store in Redwood City in 1984. He’s still involved.”

The Burlingame location is run by Daniel’s uncle, and there’s a fourth location in Belmont.

Gray’s is as much about consultation as it is about paint. “Homeowners here are very particular about color,” said Daniel. “Some people come in and get 100 samples. Others know exactly what color they want when they walk in the door. We’re here to help them complete their project, to make a home feel like a home.”

For Daniel, working with family is a big plus. “Businesses that are retained in the family are extremely low,” he explained. He is one of 10 grandchildren, and there is one great-grandchild. There may be more as Daniel is engaged to be married.

For a brief time Daniel lived in the City but quickly realized that he’s a “Peninsula kid through and through.” He likes to hike, with Bair Island and Wunderlich personal favorites.

He only briefly thought about not getting involved in the family business. “While I was in college I studied political science, but I’m not interested in politics — at all — now,” he said with a sly smile.

What he is interested in his assisting his customers: “I personally love the fact that we get to be on the forefront of adding value to the community.”