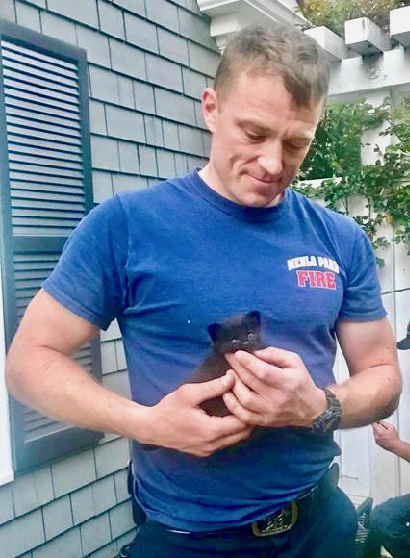 An Atherton resident who lives on Selby Lane contacted the Menlo Park Fire Protection District’s Station 3 last Friday afternoon, Marc 15, saying she had heard a baby kitten crying all morning. Upon further investigation, she realized that the kitten had somehow slipped down into an exterior water drainage pipe.

When Captain/Paramedic Mike Harrington, Engineer Joey Quadt, and Probationary Firefighter Ryle Fitzgerald arrived on scene, they located a four-inch in diameter exterior water drainage pipe directly next to the home’s foundation. It was difficult to see down into the dark pipe because it was up against the house, so Firefighters used a cell phone with its light on to shoot both video and photographs down the pipe.

What they found was troubling and not at all encouraging. The top of a black kitten’s head was barely visible. Worse yet, the pipe went straight down vertically, and the kitten was at least 14 feet below a solid concrete walking deck. San Mateo County Animal Control was called, and when they arrived, Captain Harrington turned the call over to them. But shortly thereafter, Animal Control Officers requested that the Firefighters return to the scene.

The crew of Engine 3 returned accompanied by Menlo Battalion Chief 1. The Animal Control Officers had been un-successful in being able to reach and capture the kitten with conventional snares and other equipment. Firefighters initially used a ½ inch rescue rope line, specific to human rescue and recovery operations, which was problematic in the four-inch opening and ultimately failed.

Engineer Quadt and Probationary Firefighter Fitzgerald then constructed a noose system using twine and began to use fishing line techniques, rapidly moving the line up and down using in a bobbing method. This continued for almost an hour when Captain Harrington decided to discuss other more aggressive options and/or abandoning the operation entirely. Suddenly, Fitzgerald said “Hey, I think I got it.” He then slowly and carefully pulled the line upward, capturing the kitten’s head and arm, pulling it from the pipe moments later.

The kitten was named Ryle after its rescuer, and Probationary Firefighter Fitzgerald (pictured with the kitten) was dubbed “the cat whisperer” by his fire crew and Animal Control Officers. Fitzgerald is currently contemplating adoption of the Kitten.

What a wonderful story!