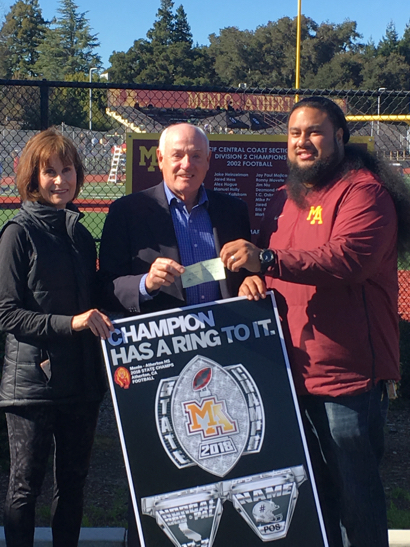 For the second year in a row the Kiwanis Club of Menlo Park has donated $5,000 to the Menlo Atherton Football Association.

“Our mission is to help the children of our community”, said Ned Moritz, president of the local Kiwanis Club. “During the past four years the football program at M-A has brought both improved academic results to the team as well as excellence on the field. We think that deserves our support.”

The M-A Football Association provides financial support to the team that’s not available from public funds. This includes snacks during afternoon study hall, some equipment replacement, food during trips to away games, and out-of-state travel for some high performing juniors and seniors so they can visit college programs and participate in summer camps. Susan Mohr is the long-time leader of the Football Association.

“We think the impact of the extra support we provide has been significant,” said Susan. “We work with the coaching staff to shape a program that is not only about football, but about building character, interest and help in academics, and enthusiasm in the whole M-A community.”

Last season the M-A Football team won the state championship in its division. It involved an extended season with travel requirements around the Bay Area but also to Eureka.

“We were able to provide some of the extra support to the team as it traveled and kept winning,” Susan said.

“Our Kiwanis Club provides about $50,000 a year in academic scholarships to M-A students, and we will do that again this year”, said Ned. “Our donation to the Football Association played a small role in helping support athlete and coach travel that resulted in the awarding of four full-time athletic scholarships for M-A players at Division-1 universities. Our aim was to help the Football Association provide these student-athletes opportunity. The results this year have been fantastic.”