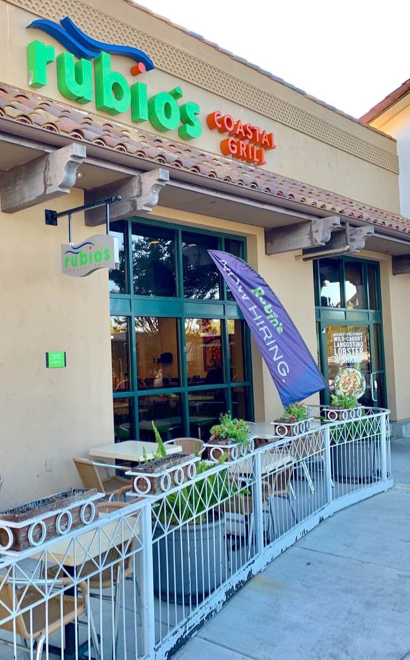 After receiving a call from the early morning staff at Peet’s Coffee in the Safeway Shopping Complex in Menlo Park reporting they smelled smoke and gas fumes next door, Captain Ken Babcock and the crew of Menlo Fire Engine 6 arrived on-scene at 4.45 am and found the Rubio’s Coastal Grill full of white smoke.

Captain Babcock requested a full first alarm structure fire response which brought in five Fire Engines, one Aerial Ladder Truck and two Battalion Chiefs with 21 total personnel. The Fire Crew of Engine 6 then gained access to the restaurant and found what was left of a smoldering and melted garbage can that had been on fire but was successfully held in check by a single activated sprinkler head.

Firefighters checked for hidden fire in both the walls and the common attic space above the store and found none. A nearby floor drain and all tile floor assisted with a relatively quick clean up once the Sprinkler System was shut down. Firefighters used a water vacuum, squeegees and mops to remove all of the remaining standing water and a fan to dissipate and evacuate the remaining smoke. The incident was brought under control by 5:00 am.

“The sprinkler water suppression system, quick action of the Peet’s employees in calling 911 and fire crews that minimized further damage, saved the day, insuring that this business will be back up and serving the community in days, not months, as we have experienced in other commercial business fires in this area,” said Fire Chief Harold Schapelhouman. “In downtown Menlo Park, half of the older buildings are still not equipped with Fire Suppression Systems and are extremely vulnerable to fires and rapid fire spread.”