The Windrider Bay Area Film Forum returns this month, celebrating 10 years of bringing thoughtful films followed by Q & A sessions to the Peninsula. New this year is series of receptions before and after each evening’s program with the goal of linking the issues covered on screen with local organizations taking action on the same issues. 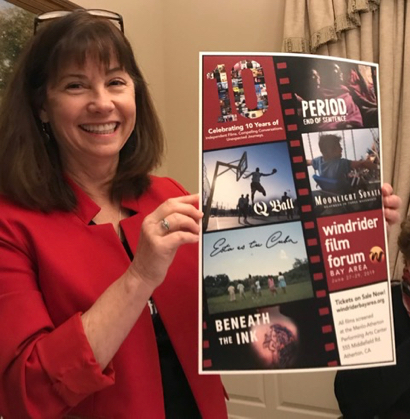 “We know that our past Forums have spurred action in the community,” said Atherton resident Terri Bullock, Director of Windrider Bay Area (pictured right). “So this year we decided to make the linkage between the on-screen messages and taking action more tangible.”

Windrider’s 2019 film journey will take audiences from San Quentin Prison to a tattoo parlor in the Appalachians, and will follow a Cuban youth finding his independence from communism and a deaf youth finding his freedom in performing Beethoven.

In this milestone year, Windrider will show its first Academy Award winning film which chronicles the introduction of a revolutionary product in India, opening opportunities for young women that once seemed impossible.

“Our goal is to present powerful stories that are intelligent, caring and intentional in their efforts to make a contribution to the world,” said Terri.

The film festival takes place from June 27 to 29 at the Menlo-Atherton Performing Arts Center (555 Middlefield Road, Atherton). Tickets — $15 general admission/$10 student admission — are on sale in advance online and also at the door (pending availability). 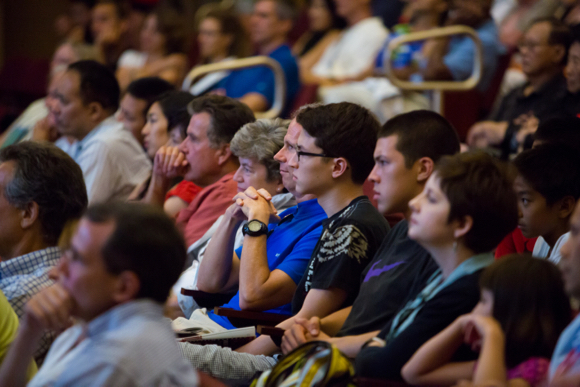 Q Ball – Thursday, June 27, 7:00 pm
This film documents the stories of the “San Quentin Warriors,” a group of incarcerated men who are involved in a competitive basketball program that is designed to educate and rehabilitate, helping them rebuild their lives.

In attendance: Michael Tolajian (director), Harry “ATL” Smith (featured in the film), and Brian Carson (local basketball coach). Moderated by Will Stoller-Lee, co-founder of the Windrider Institute. Reception to include local non-profits serving inmates and their families.

Esta Es Tu Cuba is the story of a family ripped apart by the Communist revolution in Cuba, punctuated by the son’s solo journey to a better life in the United States, one of over 14,000 children to make this trek unaccompanied by parents or other family members. Esta Es Tu Cuba has won several awards including the 2018 Student Academy Award (Bronze) in the Domestic Dramatic Category and the Best Student Film at the 2019 Windrider Film Showcase. In attendance: Brian Robau (director) and John Sayage (producer).

Beneath The Ink is a timely and provocative look at the work of an Appalachian tattoo artist in Ohio who is endeavoring to “erase the hate” by reworking racist and hateful tattoos into beautiful works of art, free of charge. Winner of numerous festival awards including the Most Inspirational Film at the 2019 Windrider Film Showcase. In attendance: Cy Dodson, director.

Period. End Of Sentence is the 2019 Academy Award-winning documentary short film directed by Rayka Zehtabchi that shows how the introduction of a simple machine that manufactures sanitary products revolutionized the lives of young women in India. Being able to attend school during menstruation instead of dropping out at puberty created opportunities that previously seemed unattainable. Winner of the Triumph Award at the 2019 Windrider Film Showcase. In attendance: Ruby Schiff and Avery Siegel (executive producers) and co-founders of The Pad Project.

Reception will focus on Ruby and Avery, who are working to develop curricula that expands the work of the Pad Project.

This is a deeply personal story told through the eyes of a young deaf boy growing up, his deaf grandfather growing old, and Beethoven when he wrote his iconic sonata. The screening will be open captioned (OC) and audio described (AD). An ASL interpreter will be present to interpret both the pre-film introduction and the post-screening Q&A. Moonlight Sonata is an HBO Documentary Films/Vermillion Films production.

Reception to include non-profits serving the local deaf and hard-of-hearing community.