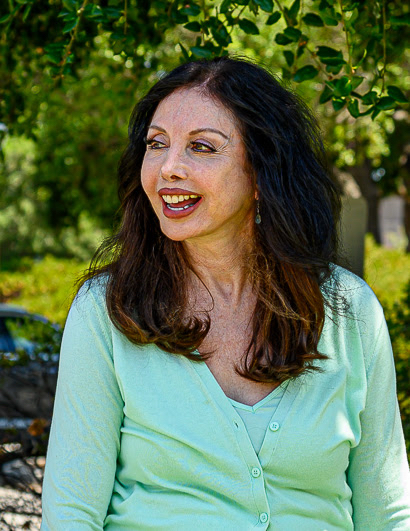 We had reached out to Menlo Park resident Linda Boroff after learning she’d won first prize in the Ageless Authors competition for her memoir, What’s So Funny? A Love Story. The judges noted she used “an extensive vocabulary and attention to detail to chart a family’s humorous descent out of the middle class.”

“I never expected to win; there are so many people in my generation who are extremely good writers,” she said.

Larry Upshaw, who runs Ageless Authors, underscored that fact: “This was a very competitive contest with many hundreds of submissions from all over the English-speaking world.”

This was the group’s third annual contest. It includes five categories of writing — memoir, humor, adventure, romance and poetry. Entrants each year include top professional writers as well as those who have never sold any of their writing, according to Larry.

As she currently does, Linda has worked for various tech companies doing content creation. “They call me their story teller,” she said. But it is screenwriting that is Linda’s real passion.

“During the dotcom bust I started writing scripts, first adapting a short story I’d written that Cornell University chose for its Epoch magazine,” she said.

Along the way she met Tom Rickman who wrote Coal Miner’s  Daughter. He proved to be an able and supportive mentor. “He gave me one of the shooting scripts for that film, and I was able to see how words and notations become a movie.”

She also counts as incredibly helpful Zoetrope All Story put together by Francis Ford Coppola. “It was pivotal to my professional development,” she said. “The people I met I still keep in contact with.”

“My feature screenplay, Space Reserved, is currently optioned and casting in L.A. I wrote the feature film, Murder in Fashion, about the assassination of designer Gianni Versace, which played in theaters and festivals and was reviewed in the NY Times and LA Times. My screenplay Fast Fade is being produced by Don Murphy (Transformers). My short story, Light Fingers, published in Cornell University’s literary magazine, Epoch, is under a three-year option to Sony and director Brad Furman.

“All of this takes a lot of patience. You really have to learn to be a good sport. Just hoping for the best as at my age I don’t have three or four decades to wait before I get my big break!”

Attention other local writers: The next Ageless Authors writing contest will open for submissions in the fall. The writing categories for the next contest will be different from the just-completed contest. To view the rules and guidelines for that next contest, go to agelessauthors.com/current-contest/ later this year.

Great to read her latest