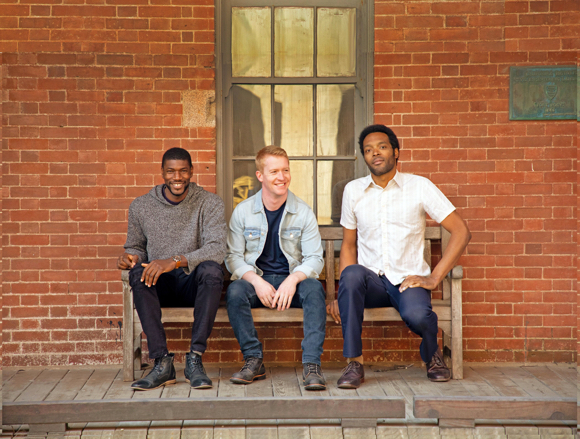 Jack Mosbacher, who was raised in Woodside and attended Menlo School and Stanford, is the first to admit he loves “a lot of different kinds of music.”

“To me, music is what emotions sound like.” he said. “I make music because it makes me feel good to bring joy to people.”

He’ll be at Menlo Summerfest this Saturday appearing on the Facebook Community Stage in Fremont Park beginning at 1:00 pm.

“I’ll be doing some of the Motown/retro pop that my band is known for,” he explained. “I’m also recording now under the name of Kezar.” He describes the newest venture as having a more commercial appeal. The online music publication, The Music Mermaid, goes farther extolling Kezar as “the world’s next big force of pop.”

Jack’s interest in Motown came early in life when he was introduced to the Temptations after stumbling upon a cassette recording. He recently recorded an EP honoring David Ruffin, the most famous of the band’s many lead vocalists.

Music was not the career path Jack was on when we first interviewed him in 2012. He was planning to undertake a PhD program at Stanford when the unexpected and tragic death of one of his Menlo classmates caused him to pause and rethink what he really wanted to do.

“It was a community shattering event, and the first time something bad like that had happened to me,” he recalled. “Somebody wonderful left here way too early.

“I was really sad and and wanted to be less sad. Performing for people was a step that was ultimately the catalyst for a new career path.”

Jack know splits his time between the Bay Area and recording in the Southland. “The focus on Kezar is paying off,” he said. “The YouTube video has about 750,000 views.”

Menlo is in for treat, hearing both sides of Jack’s musical talents this weekend.