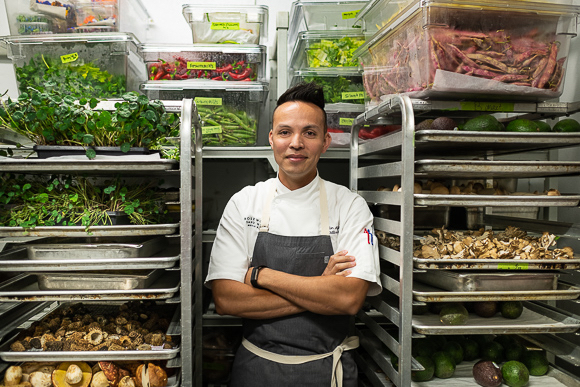 “My parents wanted me to go to law school or be a doctor. But when I was 15 1/2 years old, I got a workers permit which led to a job peeling potatoes at Trader Vic’s in San Francisco.

“I stuck with it and got better and became a line cook. Then I got serious and went to the California Culinary Academy. My parents didn’t speak to me for awhile.”

His passion for food is palpable, whether it is designing a nine-course tasting menu or developing a summer-themed menu to be enjoyed at the hotel’s Garden Terrace or poolside during the day. He haunts farmers markets, embraces what he calls “food nostalgia,” and tastes everything again and again.

“When I’m at a market I spend a lot of time walking, observing how the fruits and vegetables are maturing and behaving” he says.

His approach to developing a new dish is unconventional, by his account. “Instead of identifying the protein first, we taste through the produce. When you start with the protein, you back yourself into a corner. Plus working backwards is fun!”

Accolades have followed. For example, in most cases when an Executive Chef leaves — as Peter Rudolph did in 2017 — the restaurant is stripped of its Michelin star, but thanks to Reylon’s efforts the star was retained in his first year at the helm. “That they recognized the merits of our efforts was a great honor,” he says.

California-born Reylon counts his Filipino grandmothers, who he recalls as “always cooking,” as early influencers.

“I wanted to excel because I wanted to impress my grandmothers. With my elders getting older, cooking is a way to preserve the memories of big family style dinners with as many as 30 of us in the house.”

As an Executive Chef, Reylon recognizes that his job requires managerial as well as culinary skills.

“I don’t hire a bunch of yes men and women,” he says. “I want people who come from different backgrounds, people who can add depth to the team. I get excited about the creative process and embrace having eight different creative minds in addition to my own.

“To be a complete chef means knowing how to conduct business and maintain relationships. And most important, how to keep growing myself.”

And about those parents of his, label them very proud parents now!