Thanks for a life saved at Burgess Pool celebrated at ceremony 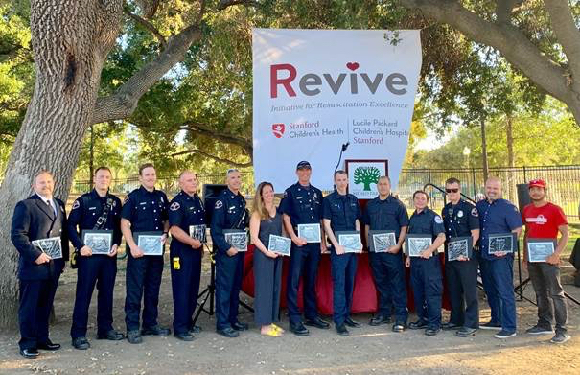 Menlo Battalion Chief Chris Pimentel was in his office at Menlo Park Fire Station 1 on Friday, June 28, 2019, shortly before 5:00 pm when he heard the report of a drowning at Burgess Pool with CPR in progress come over the Police radio.

He immediately told crew members on Engine 1 and Truck 1 of the drowning as the station emergency tones were going off. He jumped into his vehicle and was the first Fire unit on-scene, quickly locating the 14-year-old girl.

“When I arrived, the 14-year-old girl had just been pulled from the water and was pulseless, not breathing and CPR was in progress,” said Battalion Chief Pimentel. “Things didn’t look good, despite being told that her total down time under the water was only 15 – 30 seconds. What we didn’t know at the time was that she had experienced a sudden cardiac arrest, prior to slipping under the water.”

Bystanders reported that the girl had just completed a race and was at the pools edge when she took off her googles and seemed to collapse and sank to the bottom of the pool. Her fellow swimmers and coach noticed her drop below the water’s surface.

The coach and off duty Menlo Fire Captain/Paramedic Eric McGlennon immediately dove into the pool, bringing her to the surface and handing her off to head Life Guard Jonathan Martinez, head Swim Coach Julie Cohen and Dr. Peter Meaney from Stanford Children’s Health Center, who had rushed to the edge of the pool and immediately started cardio-pulmonary resuscitation (CPR).

Captain/Paramedic Matt Menard and his crew of Engineer Lemos and Firefighter/Paramedics Nixon and Kaufman on Menlo Fire Engine One arrived on scene at 4.47 pm along with Captain Neily Hunt on Menlo Truck One and her crew of Engineer Quadt, Firefighter/Paramedic Bates and Firefighter Anenson. The team of Firefighters immediately took over CPR and used Advanced Life Support (ALS) techniques, including starting an intravenous line (IV) for fluids and drug therapy and one round of cardiac defibrillation, with no success.

The patient was quickly loaded into an American Medical Response (AMR) Ambulance when it arrived. Fire/Paramedics Nixon and Kaughman continued treatment, delivering a second round of defibrillation in the ambulance prior to departure and then restarting CPR with the assistance of AMR Paramedic Klistoff and his intern Guerrero.

“There can be no greater accomplishment in this world than the saving of a life,” said the Chief. “This was an incredible team effort by so many different people from those that dove into the pool and the handed her out to the staff and doctor whot started CPR, to the Firefighter/Paramedics and Ambulance Crew who used advanced life support techniques, to the Emergency Room tTeam of nurses and doctors where everything went exactly right, which very rarely, if ever happens with the end result is she and her family are standing together here with us today. We all wish for you a long life!”

Note: The patient and her parents have asked that her name not be included in this story and their privacy be respected.