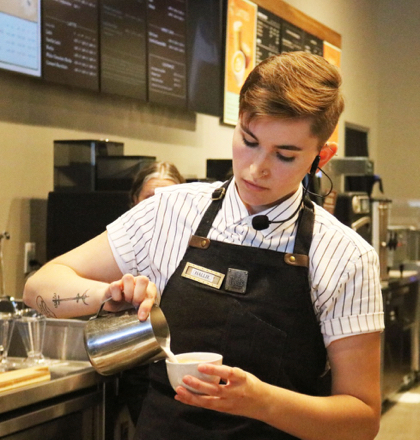 Hallie has been with Peet’s since December 2017. She is not only a barista, but an Origins trainer (teaches coffee and tea workshops for her district; can certify baristas within the district). She is also a musician skilled at playing multiple instruments.

Peet’s has 400 locations nationwide. About 15-20 people competed at the coffee bar level with 10-12 competing at the district level and six people competing regionally. The finals took place at Peet’s headquarters in Emeryville. This was Hallie’s second year competing; last year she made it to the regional level competition.

Hallie way to go. This is so good to see . Keep the good accomplishments going. Love it carla