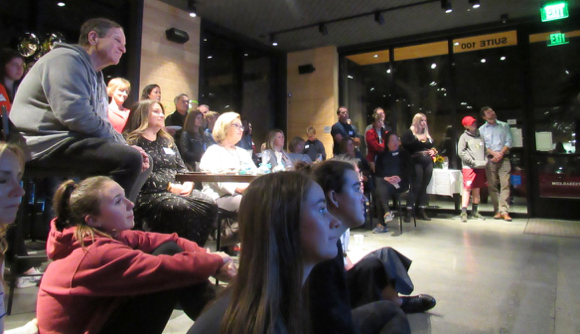 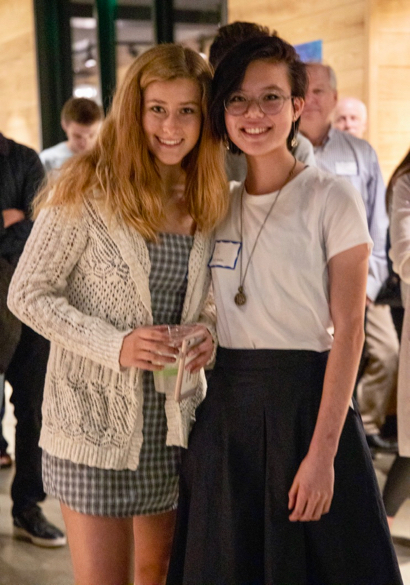 “Our organization is totally student-run,” said M-A senior Hannah Baum (pictured right with Kai Doran), who is a member of the communication committee and leader of the M-A Safespace chapter. “The students have a ton of agency in the decision making, which is really cool.” Baum was featured in the Hope to Hurt video.

A crowd gathered in Coffeebar, right across the street from Safespace’s headquarters, to watch the videos and hear speeches by the Safespace founders and students on the board. The organization began just over two years ago and now has 39 members representing public and private schools in the area. “The youth are always telling the adults what they want to get done, rather than the other way around,” said Reza Neza-Mafi, a student at Crystal Springs who was featured in the videos.

The videos were M-A junior Kai Doran’s idea, inspired after Kai participated in a 10-hour workshop about how to help a friend in need. “It was useful, but way too long,” she said. “I wanted to make something shorter, so that people might actually take the time to watch it through.” Kai also worked with freshman transition at M-A this fall and taught mini workshops about mental health and how to help peers. 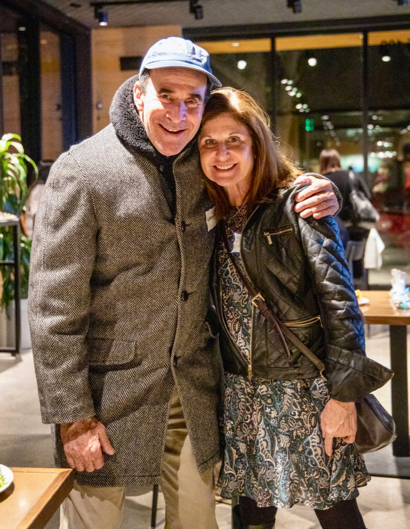 “The last round of videos that the kids produced went viral nationwide,” said Safespace co-founder Susan Bird (pictured right with Riekes founder Gary Riekes). Susan went on to explain that the students entirely wrote and produced the videos themselves. “They are really working to break the stigma of mental health at their age, and also their parents’ generation. It’s those people who might even need these videos and conversations more.”

Students from M-A and beyond collaborated to make the videos. They asked open-ended questions to peers and partnered with the Riekes Center, a Menlo Park school and community center, to film the videos. “The video wasn’t scripted. It was meant to bring out raw emotions. Everyone who participated was just really honest about mental health,” said Reza.

“Safespace is a really great community. We are a bunch of people working toward one common goal,” said Luc Yansouni, a student at Sacred Heart. “We all meet together at Safespace, and then we all branch off into our individual groups at each of our respective schools.” 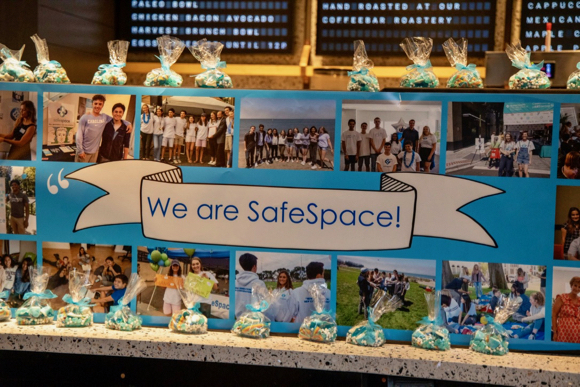 Palo Alto-based psychotherapist Havi Hall joined Safespace in its early stages and serves as a mentor to the students who created the videos. “It was an honor to be in this project,” she said. “This is the generation that is breaking the stigma about mental health. They are so honest and brave to share their stories.”

“There was nothing like this when I was growing up,” said benefactor and M-A parent Bill Harris. “But when you open up that conversation for the first time, the people around you will open up, too. People who have never, ever talked about mental health before can start to share, and start to heal.”

—– to break the stigma of mental health

Step One is to personally decline to participate in that prejudice.
Step Two is to confront those who continue to teach it, repeating them helps no one.

I have taken both those steps, you can, too.