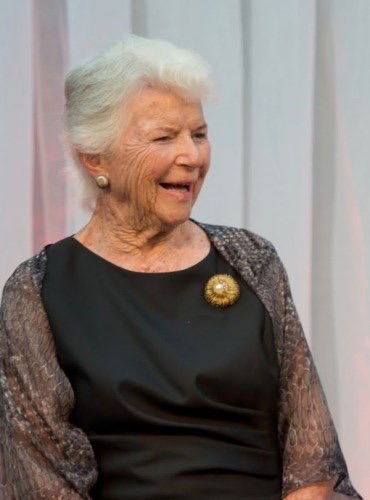 Mary Margaret “Moo” Ransford Anderson, born on November 1, 1926 in Boston, MA., died peacefully at her Atherton home on October 22, 2019, surrounded by her loved ones. The family has planned a private memorial Mass in her honor.

Originally an East Coast gal, Moo (then nicknamed “Murma”) attended D’Youville College in Buffalo, NY and met her future husband Harry W. “Hunk” Anderson at the Seneca Yacht Club in the summer of 1948.

The couple was married on July 1, 1950, in Geneva, NY, and spent the early years of their marriage growing Hunk’s business, Saga Corporation. In the late 50s, they lived happily in Oberlin, OH, where their first and only daughter Mary Patricia “Putter” was born.

In 1964, the Anderson’s moved to the San Francisco Bay Area, where Moo embraced her love of philanthropy and golf (she had three hole-in-ones!). She liked to say she was a professional volunteer, becoming a champion of Sacred Heart Schools, St Francis Center, and Stanford Hospital for many years. Later in life, she enjoyed teaching kids through Art in Action in Menlo Park.

Moo was also an entrepreneur and part owner of 3EP LTD, an art publishing workshop in Palo Alto, with Paula Kirkeby and Joseph Goldyne. 3EP was a place where many artists gathered to produce graphic works with Moo’s help.

Moo’s passion for art started in galleries, artist studios and at home, where she would “talk” to the works and listen as they “talked” back to her. She was an equal partner in building one of the most important modern and contemporary art collections in the U.S. Like Hunk, Moo always believed art was meant to be shared, and they had the generosity and conviction to give a significant portion of their collection away. These gifts included a group of pop artworks and Frank Stella paintings to SF MOMA and 655 prints to the Fine Arts Museums of San Francisco.

In 2011, Moo and “Hunk”and their daughter, “Putter,”  pledged the core of the family’s 20th-century American art collection to Stanford University. The original collection of 121 works by 86 artists, housed in an award-winning building designed by Ennead Architects, opened to the public in 2014 as the Anderson Collection at Stanford University.

For Moo, nothing compared to seeing artwork in person. “It’s good to study art in books but something happens in the presence of the original – it affects the brain, taste, feelings and more,” she commented at the opening of the Anderson Collection. When asked if she would miss having the art in her home, she replied, “I think in order to enjoy art, you have to share it.”

Amid all her accomplishments, Moo’s roles as a mother and grandmother were her favorite. She went to every one of Putter’s swim meets and horse shows and even helped her with her art business, teaching Putter how to identify and promote great, young artists. Moo was also the best grandmother to Devin Pence, taking train trips across the country, teaching her how to drive the ’79 bug in Glenbrook, and sharing her love of golf in Borrego Springs.

The family remembers Moo as an incredibly strong woman, one who voiced her opinions, ensured she had equality in her marriage, and earned the respect and admiration of people from all walks of life. She was savvy, thoughtful, curious, and energetic, bringing 150% to everything she did.

In lieu of flowers, please consider making a donation in Moo’s honor to St Francis Center. Checks can  be mailed to 151 Buckingham Avenue, Redwood City, California 94063.