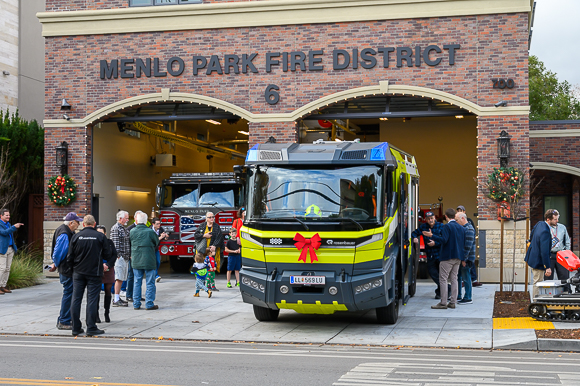 An electric fire engine, which is black and yellow and looks more like a bus than a typical red fire truck, made its public debut yesterday at Menlo Park Fire Station 6. Also on display was a firefighting robot (bottom photo), used at chemical fires or in situations where it is too dangerous to send a person.

The burning question, of course, is whether an electric fire engine could run out of juice during a call.

“I’m not concerned about that and I’ll tell you why, because we, in the design phase, we’ll make sure that we don’t have a single point of failure,” said Menlo Park Fire Chief Harold Schapelhouman.

While the fire engine is electric, it does use diesel to fuel the generator for its back up battery. It can run for about eight hours. If the engine is still out on scene after eight hours, more diesel can be added to keep the back up power supply running. 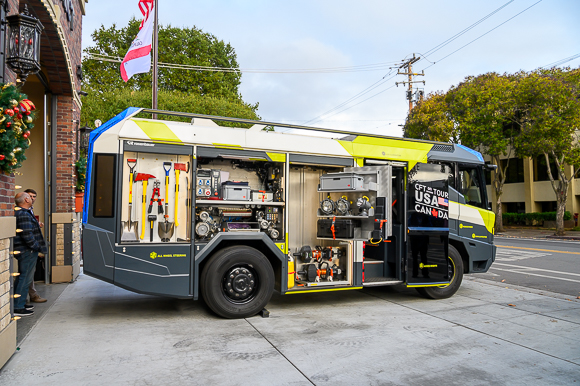 Schapelhouman said the plan is to make changes to the truck to fit the department’s needs. It would first be used and tested as a rescue truck before its used as an engine for fighting fires.

He said the cost of an electric engine is about $1.2 million, which is comparable to a traditional tiller ladder truck. But the electric engine will save money in the long run because there is no need for fluids, filters or fueling it, according to the Chief. Representatives from Rosenbauer, the company that manufactures the electric fire truck, presented a draft contract to the Menlo Park Fire District Board yesterday evening. 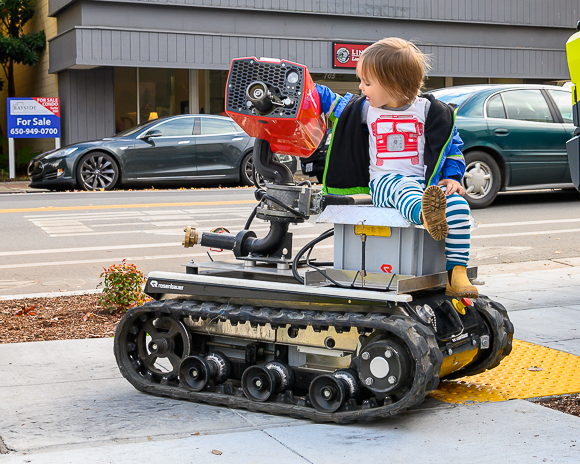 “I am very excited that the fire board is considering moving forward with this purchase and am hopeful that we will purchase it,” said Fire District Board Chair Virginia Chang Kiraly.

“The fire district always strives to serve our community in the best way possible. Our community is, of course, the residents of the fire district but also includes our hardworking firefighters. These cutting-edge electric fire trucks will pollute the air less, be quieter, more energy efficient, and more nimble than our current fire vehicles. The health of our environment is important to the fire board, as is the health of our firefighters who use our apparatus and equipment daily.

“The community response has been extremely positive. Being in the Silicon Valley, the fire district is very fortunate that our constituents are so supportive of, and expect, us to be leaders in emergency response and preparedness. climate change in the best way we can as a public agency.

“I encourage the community to attend our board meeting next Tuesday, December 17 [at Station 1, 300 Middlefield Ave.] to give their input, which is important because how we move forward should be a shared vision between the fire district and those we serve.”