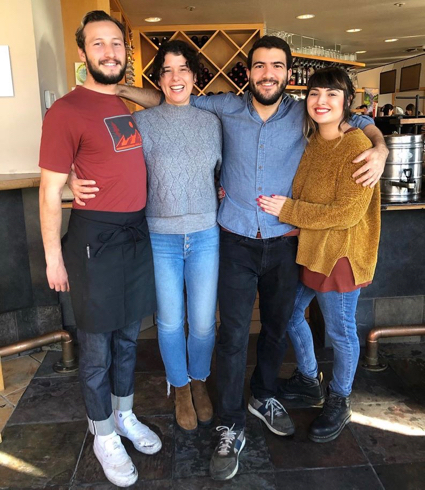 We’re sure we aren’t the only ones in Menlo Park who feel so lucky to have two great Menlo Park “institutions” side by side — Kepler’s and Cafe Borrone. The latter is celebrating its 30th anniversary.

“We originated in Redwood City in 1979,” emails Marina Borrone, “and opened in December of ‘89 in Menlo Park. We have guests from 40 years ago who still have their favorites!

“I was 18 when we opened in Menlo Park and was always involved but took over at 23 when I graduated  from college. So it’s been under my leadership, vision etc. for 25 years.

“It doesn’t include some of our main people. It was a snap shot we took the day I returned from a trip to Italy. I missed our food!”

We recall the same sentiment about “missing the food” after our recent international travel!

Paired with Keplers, this is the reason I return to Menlo Park. I remember when they moved in, they were the best thing that happened on the El Camino. Hoping you enjoy another 30 years! I love the salads and those waffles!