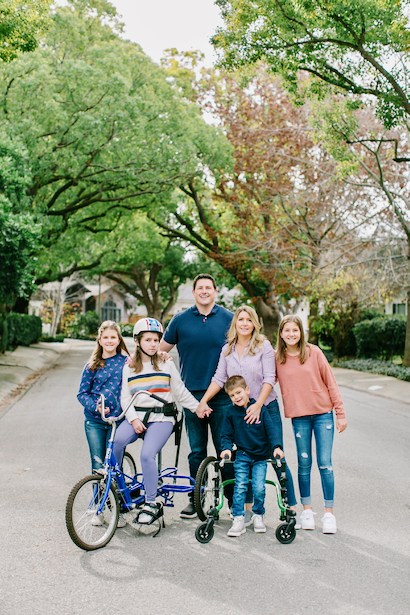 Menlo Park- based TESS Research Foundation (TESS) is the recipient of a $450,000 grant from the Chan Zuckerberg Initiative (CZI) Rare As One Project. TESS was selected due to its innovative, patient-led approach to finding a cure and treatments for SLC13A5 Deficiency, a rare genetic epilepsy that causes a lifetime of debilitating seizures that begin within hours of birth. TESS Research Foundation is one of only 30 patient-led organizations in the country to be selected.

TESS was founded by Kim and Zach Nye, parents of four young children who live in Menlo Park. Two of their children, Tessa (age 16) and Colton (age 6), suffer from a rare genetic disorder that was previously unknown and caused the children to have hundreds of seizures daily since birth. The Nyes launched TESS Research Foundation in 2015 to fund research to better understand why mutations in the SLC13A5 gene cause neurological disease and to find the best treatment options.

“We are so grateful to CZI for their vision and leadership, helping organizations like ours develop cures for diseases like SLC13A5 Deficiency,” said Kim Nye.  “As the mother of two children with SLC13A5 Deficiency, I have watched my children suffer from hundreds of thousands of seizures — something I hope fewer moms will be able to say in the near future as we discover new cures for genetic epilepsy.”

In a phone interview, Kim underscored the wonderful support received from their local community, including the Menlo Park City School District. “In that regard, we’ve been so lucky,” she said. “Now with this grant, we can gain a clearer picture of what this disorder looks like and set priorities going forward.”

CZI announced $13.5 million in funding to 30 patient-led organizations that are working to find treatments and cures for rare disease. These grants are part of CZI’s Rare As One Project, aimed at supporting and lifting up the work that patient communities are doing to accelerate research and drive progress in the fight against rare diseases.

“No one is more committed to finding cures for rare diseases than the patients and families of those affected by these disorders,” said Priscilla Chan, Co-Founder & Co-CEO of CZI. “We are proud to support patient-led organizations as they pursue diagnoses, information, and treatment options in partnership with researchers and clinicians.”

The grant funding will allow TESS to build the infrastructure necessary to raise funding for collaborative research and a cure. The grant will also bring together key stakeholders — patients, clinicians, researchers, and industry — at the International SLC13A5 Deficiency Research Roundtable March 22-23, 2020 in Dallas, Texas.

The TESS Board of Directors and Scientific Advisory Board will remain all-volunteer. Its members include Brenda Porter, MD, PhD, Professor of Neurology and Matthew Bainbridge, PhD, Associate Director of Clinical Genomics Research at Rady Children’s Hospital San Diego, who will also serve as the Primary Clinician and Primary Researcher, respectively, on the TESS Rare As One grant.