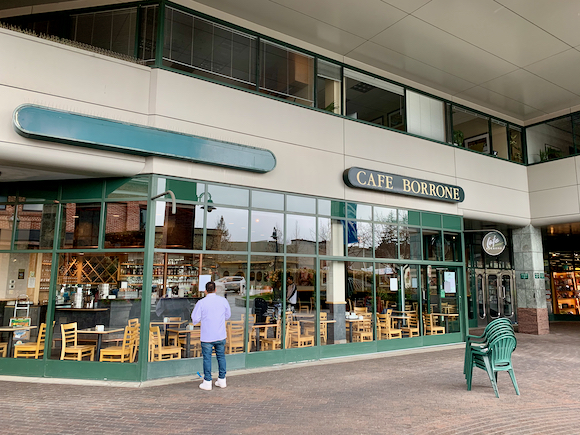 On Friday, Cafe Borrone in Menlo Park was heralding “Friday vibe, clear blue skies and lots of sun.” Then came the rain — and the announcement that the popular downtown eatery would no longer be open for dinner starting Saturday, March 14.

And then that they’d be closing entirely from today through Sunday, April 6, based on the San Mateo Health Department order prohibiting public or private gatherings greater than 50 people and requiring severe preventative measures for any that involve between 10 and 50 people. 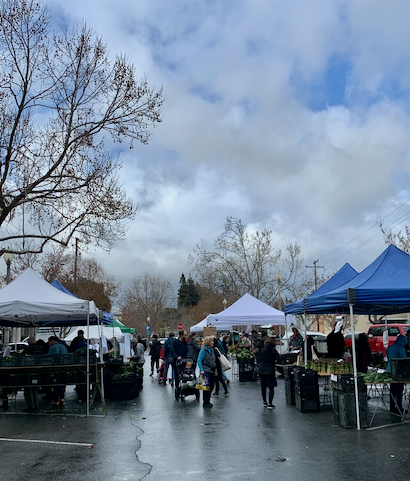 We wandered over around 10:00 am this morning to find Marina Borrone there with some staff. They were selling food they had on hand to-go, including the cafe’s delicious chicken salad. “I’m fairly certain we’ll sell our existing supplies today and be closed tomorrow,” Marina told us.

There was confusion about whether or not Menlo Park’s farmers market was going to be held or not this morning, and vendors — and shoppers — were sparse at the market that was indeed open. Organizers and vendors had received notice that it would be “cancelled until further notice” by the San Mateo County Health Dept.

But then early this morning, organizer Lori Hennings received word that it was “on again,” posting on Facebook: “As of early this morning (around 7:50 am) the news came to us that farmers markets were exempt from the order by County Health!!! So there will (probably) be some sort of market this morning (Sunday 15th). We expect some farmers will be there today, but some won’t be because they got the news too late, and it takes them some hours to get to Menlo Park.”

Pietro told InMenlo contributing photographer Robb Most that he didn’t sleep last night worrying about all the fish they had which won’t keep, given that he was told there would be no market. “But he was down to just tuna when I stopped by late morning!” reported Robb.

As of late yesterday, there were 32 coronavirus cases in San Mateo County. The first death was confirmed this morning “an older adult with underlying health conditions,” according to the San Mateo County Public Health Department.