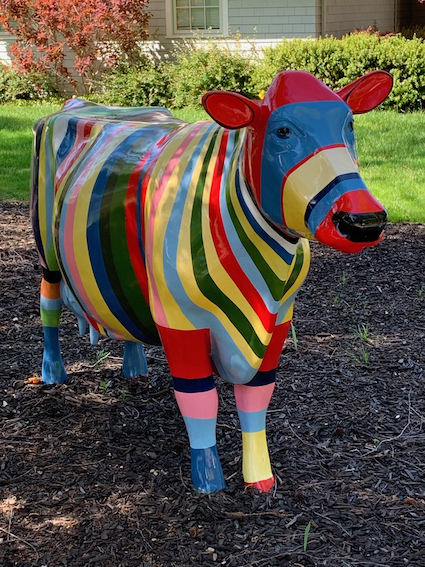 A very colorful cow has joined a pig and frog — who often sport seasonal bows — on Greenoaks Drive in Lindenwood, as spotted by Judy Horst on a neighborhood walk.

We were lucky enough to catch the first Cow Parade, as they are called, in Chicago in 1999, and this cow is very reminiscent of what we saw. Here’s some background from Wikipedia:

“The concept of  ‘cow parade’ has its origins in Zürich, Switzerland, in 1998 by artistic director Walter Knapp, it is based on an idea which was realized in the same city for the first time in 1986: Lions as the symbol of Zurich were painted and then on display throughout the city.

“The Zürich exhibit 1998 was not called ‘cow parade’ — it was called Land in Sicht (roughly translated as ‘Countryside in view’). The concept was brought to the United States when Chicago businessman Peter Hanig, along with Commissioner of Cultural Affairs Lois Weisberg, organized an event in Chicago in 1999 called Cows on Parade.

“A Swiss company, CowHolding Parade AG, started to explore the idea. The American company capitalizing on this idea, CowHolding Parade, was founded in 1999; the Swiss company promptly sued but the case fizzled out without results. A bronze casting of one of the cows is on permanent display in Chicago in commemoration of the city’s initial exhibition.

“The success of this venture inspired many other cities to host similar fundraising projects. The idea has been taken up by other cities which have chosen animals for public art projects with painted fiberglass sculptures.”