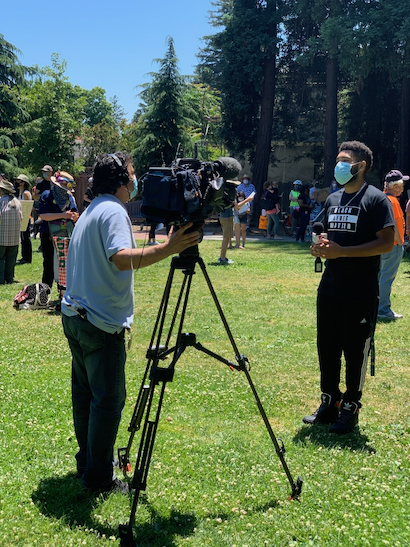 Local teens Henry Shane and Daniel Roman are at it again, this time organizing an “LGBTQIA+ and Menlo Park in Solidarity with Black Lives Matter Rally” today at Fremont Park followed by a march through downtown, which caught the attention of at least one local TV station.

Daniel is a sophomore at Menlo-Atherton High School and Henry is a junior at Kehillah Jewish High School. Attendees were mainly teens and young adults, although there was a sprinkling of ’60s era folks.

Hi,
I would just like to add that Makayla Miller was also involved in this protest and she organized it as well.

Thank you very much for the protest!
It is incredible that although it was a small group of peaceful demonstrators there were undercover agents. Thank you very much to the organizers for chasing them away!
We will fight for equality, justice, fairness, morality and honesty!

I’m proud of our local people!