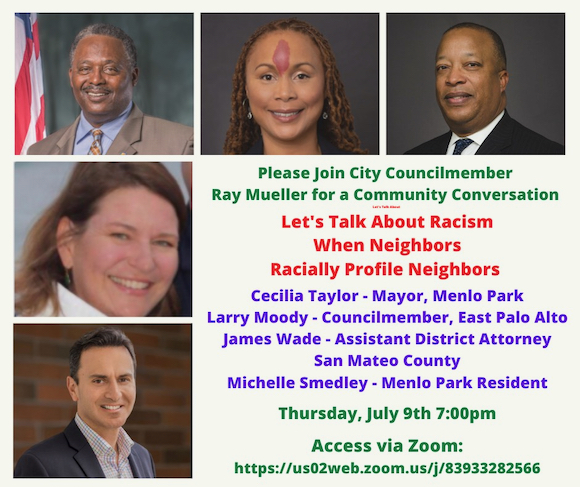 “For some background on this event: On June 30th, my neighbor Michelle Smedley shared the following on Nextdoor.

“‘My son is now 15. He is transitioning from a cute kid body, into that of man. I conceded in December and gave in that he is officially taller than me, a milestone he has been trying to achieve for quite some time. This, and the fact that he is biracial and not white, now seems to make him a threat. And his friend base, those great and wonderful kids who just happen to come from a diverse range of cultures, even more so.

“‘Since February, the police have been called on my son and friends twice, sadly once while at the the duck pond just down the street from our home. He and his friend encountered expletives from a middle aged male who told them that “they did not belong” in the park and proceeded to call the police on them. I am very happy to say, the MP Police dealt with it very professionally. Dog walking on the trails off of Valparaiso, they have encountered people videoing them and threatening to call the police because “they didn’t belong” up there.

“‘He had a run in with a teen at the grocery store in RWC who actually called him the N word. The mother of the teen called the police on my son and friends when my son told him that wasn’t really an appropriate word to use. Happy to say the RWC Police acted very professionally too. Last evening, a car decided to record them as he was driving down the Santa Cruz Ave quite to detriment of the cars behind him.’

“Michelle’s Nextdoor post called on neighbors to please stop racially profiling her son. It seems to me it’s past time for a larger community discussion on this topic. I hope you will join us.”