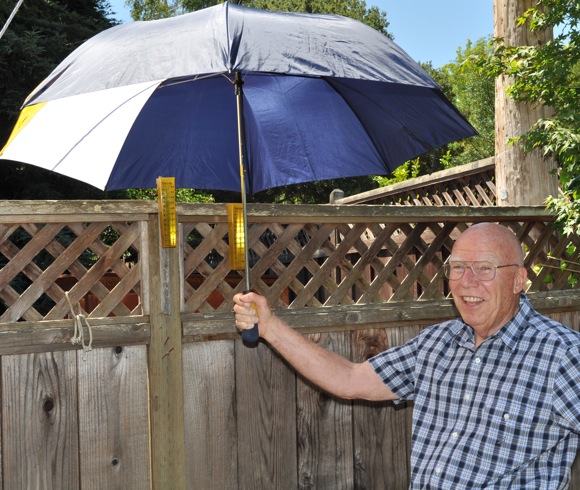 Since InMenlo’s founding in July 2009, local weather watcher Bill Russ has promptly and accurately reported the rainfall for each 24 hour period in which there was precipitation, often contrasting his rain gauge measurements in central Menlo Park with those of a friend who lives further west in Sharon Heights.

Today, he turned in his results for the 2019-2020 rain year which started on Oct. 1 and ended today. “That’s 8.72″, a low rain year as contrasted to a much wetter 23.1 inches in 2018-2019.” And with that report he is passing the rainfall reporting baton on to Dennis Nugent who has a fancy new digital gauge backed up by Menlo resident Mike Laine’s traditional gauge.

Bill has called Menlo home since 1952, and he and his wife Sally have lived in their current  house, where the two rainfall gauges are located, for 54 years. He started measuring rainfall because, he says, “It’s something old guys do.” Initially he had a network of buddies that he compared recordings with but with the passage of time, that group has shrunk, largely due to inevitable transitions.

Pressed for some final thoughts, Bill emailed: “I started measuring rainfall in 1995.  It is my nature to count things I guess. At one point I had 50 plus chunks of scripture committed to memory. These days I am content to hang a different colorful banner everyday from the front porch. Oh, by the way, there is a Charles William Russ #6!”

Thank you, thank you, Bill Russ!