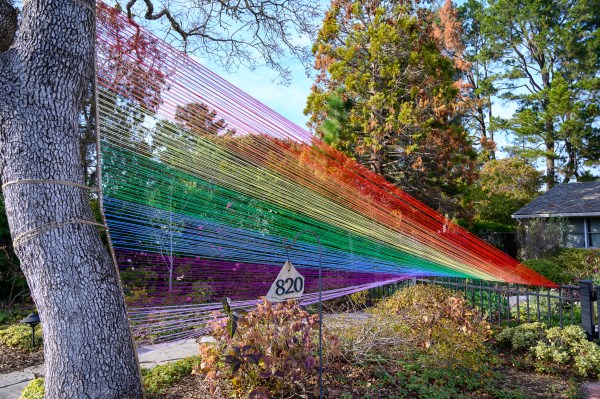 InMenlo contributing photographer Robb Most spotted a string rainbow just before Christmas in the Sharon Heights neighorhood. We followed up with homeowner Jay Crim who explains:

“This started with us looking for things to do with our middle-schoolers while they have two weeks off of school for the holidays. We were looking up large-scale art projects to make together and were inspired by string art installations from around the world. Seventy-five dollars of yarn later and we were ready to give it a shot ourselves.

“Once we decided on string art, a rainbow seemed like the obvious thing to make. This year has been a pretty dark time, so we hoped making something colorful and bright might bring a little joy.

“I remember going to get something from the Safeway last month, and when I got there everyone was just standing outside in the rain taking pictures of a rainbow that had appeared. The woman whose car was parked next to mine took a photo, then turned to me and said, “Hope. That’s the caption I’ll put on it.” Hopefully when people come down the street and see our rainbow, they have similar thoughts.

“How long will it be here? We’re actually curious to find out ourselves!

“The construction isn’t super sturdy – it’s just made out of inexpensive craft store yarn. So by its very nature it’s going to be somewhat ephemeral. We weren’t even sure it would last through the first rain, since we didn’t know what the extra water weight would do to it. But so far, it’s holding up. We’ll leave it there as long as it continues to look good.

“After that, who knows? We’ve got a lot of yarn left over. And this probably isn’t the last school vacation during the pandemic.”

Sweet! Thanks for brightening my winter!

Love it, go by every day and appreciate it.