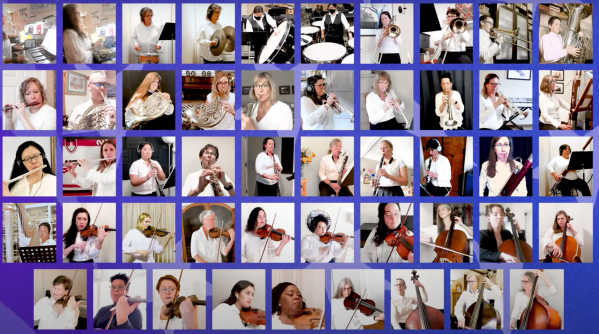 “We each recorded our parts in our homes, and the audio/video engineers at Arts Laureate did a fantastic job mixing them into the final product,” said Kathy.  “Major Dix was incredibly welcoming and has really created a community among the musicians. It was such a wonderful experience to collaborate with musicians from throughout the state to create a new piece of art honoring our first female vice president.”

Dix had been in discussion with the Rhode Island Philharmonic to debut this symphonic march, originally titled “Madam President,” until the COVID-19 pandemic suspended live performances and the work had to be shelved.

Following last year’s historic election, Dix was inspired to rededicate the march to both the first woman vice president and all of the extraordinary women who enter the American political arena.

“When the Associated Press called the election on November 7, several colleagues said, ‘You’ve got to change the title!” Dix said. “Just as the vice president of the United States is also the president of the Senate, this march can pull double duty.”

Dix then assembled an all-volunteer orchestra featuring musicians from professional, semi- professional, college and community orchestras. “This performance is not only for women, but by women,” Dix said. “I want to pay tribute to their hard work over the past 100 years and to inspire younger women to march forward with their dreams, where becoming Madam (Vice) President is the ultimate brass ring.”

Thank you to the community of Menlo Park for nurturing and recognizing such talented neighbors. You live in a wonderful place.