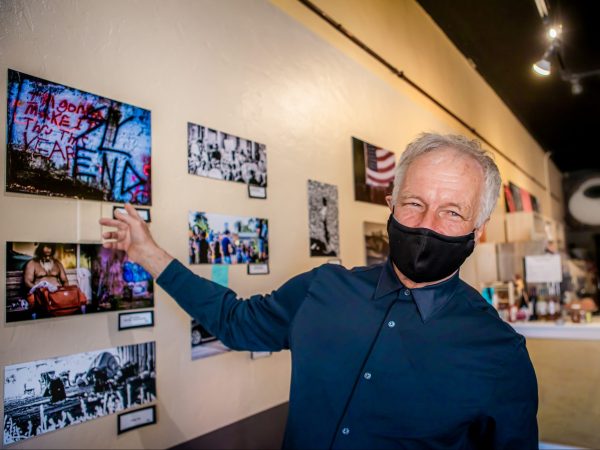 Where once Bruce Spencer surveyed land with a theodolite, he now survey faces and places with a camera. Of note: both tools can sit atop a tripod.

“I like doing documentary work of what’s going on—things I can’t turn away from,” he says. 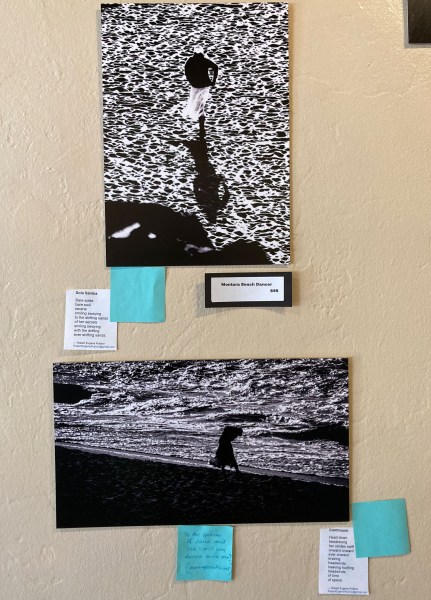 His latest in what has been a number of photographic series is Current States: Kindness Over Fear now on exhibit at Cafe Zoë, which has been a long-time favorite hang-out of his.

“This is the first time I’ve displayed people,” he says, adding: “I don’t seem to be as bold as I used to be in approaching people.”

Shooting with a FUJI XT, Bruce can spend four or five hours a day when working on a new series. His images are mainly color as he says he’s not yet quite comfortable with black and white.

“Sometimes I’ll make an image from within an image,” he says.

To further engage viewers of his photographs, his girlfriend suggested a contest, explained here:

“We want to inspire people to look at the images of the current state of the pandemic: people / surroundings / kind thoughts and see what kind of questions prompt you? If you cannot come up with a meaningful question, use one kind word to describe the image of your choice presented on the wall of Cafe Zoë  (1929 Menalto Avenue, Menlo Park).

“Write down a meaningful question/one kind word for one or more images presented on the wall of Cafe Zoë on a blue post-it-note, with your text number or email. Post your finished note under the image of your choice.

“The owner of Cafe Zoë [Kathleen Daly], the sponsoring photographer [Bruce], and the community will select meaningful questions/kind words that are inspiring and thoughtful to receive the cash prize of $100 and the image of your choice.” 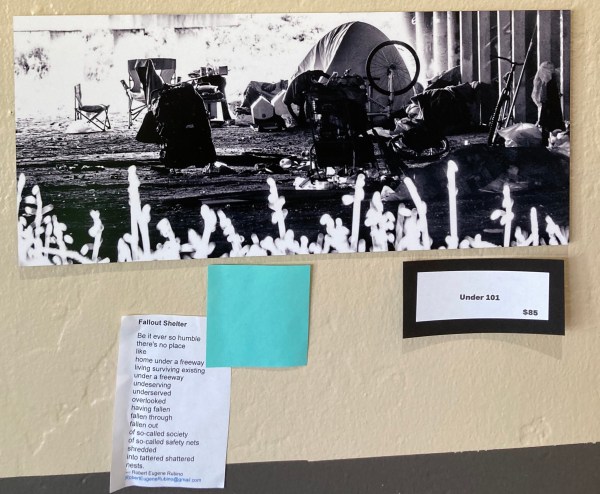 To date, people are not only putting up kind words they are writing poems!

I have never seen a photographer establish a graphic identity and proceed to advance it in steady steps, in the short amount of time Bruce Spencer has. The fact that that photographer incorporates a social vision within the power of such an identifiable style, so naturally, has made it even more remarkable. We should look forward to seeing many more delightful surprises from Bruce’s work.

For context, I’ve been a professional photographer & occasional teacher of photography for 60 years.