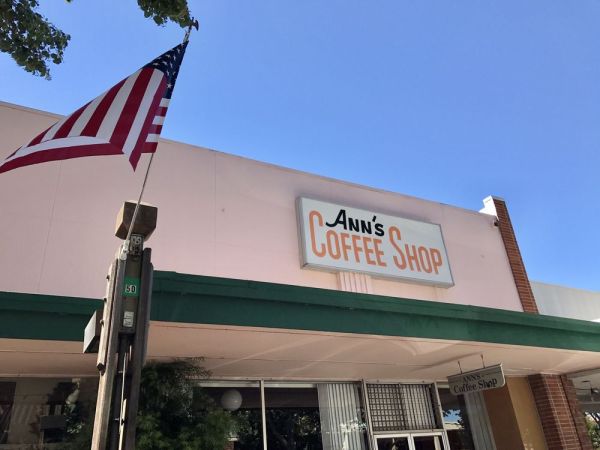 Editor’s note: Ann’s Coffee Shop, a fixture in downtown Menlo Park for 75 years is closing on April 19. The closure was first reported by the Daily Post. The building that Ann’s is in has been sold. Owner Nicki Poulos told the Post that there will be a community pancake brunch on the last day with some of Ann’s paintings and memorabilia being offered for sale. Below is an article about Ann’s that was published in 2015.

Ann Gilbert opened Ann’s Coffee in Menlo Park in 1946, making it one of downtown’s oldest continuing establishments. Three different owners have carried on her legacy by enhancing the menu but never removing any items or straying from her original recipes. Ann’s still possesses paintings from the 1960s, which embody a unique style, admired by many customers.

Current owner, Nicki Poulus, bought Ann’s in 2008 and has made an effort to preserve many aspects of the restaurant. However, she and her son decided to implement a few minor changes, including opening Ann’s on Sundays. They discovered that this additional day had a positive outcome, as Saturdays and Sundays are now their busiest days. In spite of the restaurant’s relatively small capacity, the staff members at Ann’s work hard to reduce the wait time, which on a busy day, is an average of ten minutes.

Poulus describes Ann’s rare characteristics. Unlike numerous restaurants on Santa Cruz Avenue, Ann’s is not part of a chain and the staff members “cater to the customer’s needs.” Ann’s takes great pride in servicing its clients and is happy to alter its menu in order to create a better experience for the customer.

This strategy has obviously proven successful, as some families have been eating at Ann’s for as many as three generations. Diners consist of business men and women grabbing a bite to eat before their meetings and large groups of students who need to eat before various sporting events. During the weekends, many loyal Ann’s customers can be seen waving across the restaurant, greeting one another.

Ann’s is open seven days a week, and constantly serves breakfast. Cooks prepare meat and fruits every morning, fresh and ready for enjoyment. In addition to these items, Ann’s offers a variety of breakfast dishes, the most popular being the French Toast and Pancake Combo, served with eggs, and a choice of bacon or sausage.

Two soups are cooked each morning, their components varying from day to day. One unique aspect of the menu, praised highly by Poulus, is the Roast Turkey with Dressing, served with other Thanksgiving delicacies.

According to Poulus, the staff is “like a family. We are friendly, and we help each other.” The head cook has been a part of the Ann’s family for 30 years, and one waitress has worked there for over twenty. Poulus believes Ann’s has become a “landmark of Menlo Park, something that everybody knows.” She plans on preserving the friendly environment among the customers and staff, and looks forward to serving the people of Menlo Park for many years to come.

Elizabeth McColloch wrote this article when she was reporter for the M-A Bear News where this article originally appeared; used with permission.

over-priced and mediocre diner food along with terrible service. Ann’s could be a great spot, but it isn’t for those 2 reasons.

Are you sure that you are human?

You sound like one of those complainers that find fault with everything. So sad. I also noticed you chose anonymity….

RUDE ! I think it’s a wonderful establishment with some great traditional savory breakfast. Let’s try to keep some of the history of Menlo Park !!

Amen! To that! We have three generations in my family that adore Ann’s. Ann’s has been our comfort place and loved the food and staff!

We love love love Ann’s! It’s inexpensive, friendly and an institution. I went as a kid and now take my kids as well. Curmudgeons need not go there!

I went there as a kid, too! I’m from Atherton but live in FL now so haven’t been in decades. My parents are still in the area. Ann’s makes THE best homemade peach pie. This closing news is just so sad!!! What a Menlo Park icon to be losing!

Ann’s is the best place for breakfast in Menlo Park. Food is great and reasonably priced and the staff is very good. Can’t start my weekend days without it.

So sad to hear this! Ann’s is a classic diner..simple and affordable food, with friendly and familiar service. Their no frills approach is so refreshing given the overly fussy breakfast offerings that are now the norm.

So sad to lose a legacy restaurant that has served so many families in the local area. Thank you Anne’s for all the years of service and providing a friendly cafe and delicious breakfast!

Oh wow! Ann’s is our family favorite! We are very sad to hear this news. Τα λέμε

Another fixture of Menlo Park and a big part of the character of the city is closing. There are not many left and the city does not seem to care…

Please try to save this gem, we’re losing everything in downtown Menlo Park..people step up and try to preserve some history

a wealthy person bought Keplers for a family member to run. MP didn’t save anything

I just loved Ann’s.. her French toast was the best anywhere!! So sad to see her tasty and no frills restaurant shut down! 🙁

If you grew up in Menlo Park or Atherton as I did, you knew and loved Ann’s.
The yummy breakfast food, the hamburgers, the potato salad on a piece of lettuce, chicken salad sandwich on white toast, a milkshake or a coke in a glass with crushed ice, the art on the walls! The pies were superb. My father would often sneak away for a piece of Peach Pie or Apple Pie and a cup of coffee at Ann’s under the guise of going out to “buy a newspaper” ( this was back in the late70’s-80’s). Mom and I always wondered why it took him so long to go out for a paper? He finally confessed. He loved Ann’s pie!!
Good memories of simple, good food. Hard to imagine Santa Cruz Ave. without it.

Are they open to eat inside?

I been to Ann’s twice in 28 years. The decor looked very dated, not charming like Bucks, just old stuff. The food was fine – simple and unremarkable, the service was attentive and pleasant, but I recall that they don’t take cash, so I never went back.

Too bad they are closing. I wish everyone well. The servers were good, so I hope they find other jobs soon.

Ann was my special Aunt. As a young man Ann treated me to breakfast many Saturdays. I started going there in 1948. She was such a sweet woman. Did I mention banana cream . I still go there when I pass by Menlo.

Can’t Say How Many Times I’ve Been To Ann’s . . .But, MANY!!!! Moved To Menlo Park In 1953, Just Goes To Show I Can’t Recall The Many Times I’ve Eaten There!!!! Someone Said It Right: You Would Always See A Friend / Acquaintance There!! My Favorite Was The Breakfast And TheFriendliness Of ALL That Worked There!!! Very Sad To See Them Go!!!!!

John! You moved to MP 2 years before I did! So different to go back there now with all of our old favorites gone, including the Oasis, Foster Freeze, Johnny’s Smoke Shop and on and on! Now Ann’s will be added to that list. 🙁 I might have to make my own pancakes now! Janbo

All of us Menlo Parkers think of Ann’s with nostalgia and warm feelings. I worked at SRI and was told “go to Ann’s for lunch” when I first arrived many years ago. . I remember when Ann remodeled and put up the current “art work” which has been there untouched for decades. The food was tasty, I met there with many friends, the waitresses went out of their way, as far as I know they thankfully didn’t serve kale, and lately I loved the lemon chicken soup,. What a loss this will be to Menlo Park.

Don’t wait to go and say goodbye. I was there for lunch yesterday and things were tense, they may not be able to stay open until the 19th… a real shame.

curious why you would post a 6 year old article with zero new information? Makes no sense for the reader? the business is closing, what does a fluf piece about how was run 6 years ago help anyone?

Went there once last year, because Stacks was closed. Food was horrible serve wasn’t great. I wish I had a good memory of my experience. I’m glad others did and I wish the staff the best in their next roles.