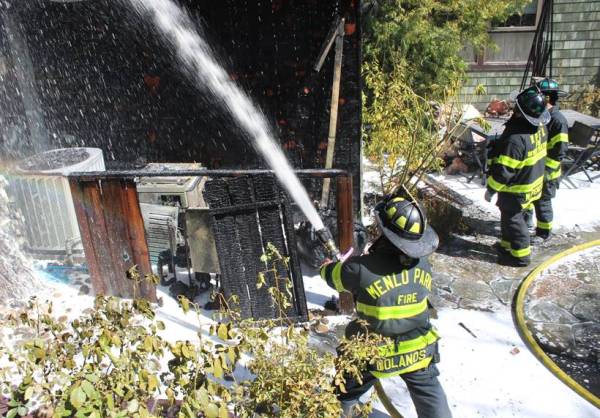 Menlo Park Fire District Firefighters responded to a reported “house on fire’ in an area known as Stanford Weekend Acres located along Alpine Road when a single caller reported that the “rear of the house” was on fire at 1:47 pm, Thursday, April 1, 2021.

Fire Captain Jane Hunt and her crew on Menlo Engine 4 arrived on-scene at 1:52 pm and reported that “they had a working fire involving the rear of a two story, multi-level, shingle sided structure with fire involving the entire side of the building and pushing into the roof eves….Engine 4 would be attacking the fire”.

After quickly knocking down the exterior fire, crews entered the home surprised to find it almost un-damaged. Upon further investigation and while noticing smoke coming from the second floor, they quickly realized that the fire had extended into several attic crawl spaces. Additional hose lines were deployed inside as ceilings were pulled down by additional fire crews who were arriving on-scene. Members of Menlo Truck 1 cut holes from on top of the roof in order to allow the smoke and heat to escape from the attic space, even as crews below worked to extinguish the hidden fires.

Fire Marshal Johnston and his team determined that the fire started on the outside of the structure in and around a swimming pool and hot tub’s mechanical and electrical equipment. The structural dollar loss is estimated at $125,000 with damage to contents at $32,000. The 2,510 square foot home sustained significant damage.

There was transformer explosion earlier in the day on alpine road I wonder if this could have started the fire in the mechanical room for the hot tub and swimming pool by causing a power surge. The house that was on fire was in back yard of 4 Sneckner court near where the transformer exploded. It didn’t help any that the house was made out of shingles if the fire ran up the second story and into the walls of the attic.