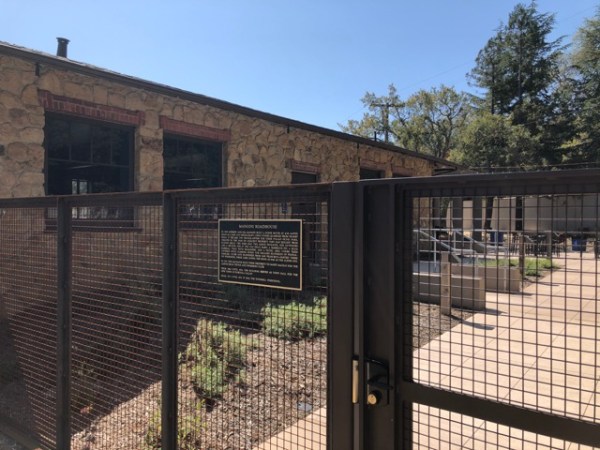 Alpine Road from the intersection near the Stanford golf course was once a winding road leading westward to what is now Portola Valley. Along the way, the road turned at a narrow crossing of San Francisquito Creek at what was called Suicide Bridge.

From there the road went onto the Alpine Inn, formerly Rossotti’s (built in 1852), and beyond to another tavern called Mama Garcia’s, otherwise known as La Casa Blanca (opened in 1947), 3.2 miles past “Suicide Bridge.” The bridge was likely named for a dangerous crossing amidst the curves. Mama Garcia’s was a popular affordable dining spot for Stanford students throughout the 1950s.

Across Alpine Road, then known as Portola Road as it continued on through the village center, was the Mangini Barn, which also held all sorts of Stanford gatherings, including dances. The barn had been the centerpiece of an Italian Picnic Park established in 1939 by the Mangini family. The stone building that remains at the entrance to Alpine Hills Tennis and Swimming Club was the original roadhouse tavern. In 1954, the tavern was operated by Rudy Hubner and known as Rudy’s Alpine Inn. Alpine Road has just been renamed but Rudy and his wife, Elisabeth, were from Bavaria, home of the Bavarian Alps. The bar specialized in German Rhine wines.

Rudy was killed in a Portola Road car crash in 1955. His wife operated the bar until 1957. A year later the new owners of Rossotti’s renamed that tavern the Alpine Inn, using the name initially chosen by Rudy, who also ran “Rudy’s” in Redwood City at the time.

On Portola Road toward the town center is a now vacant restored building that had been the Portola Club, operated by the Gambetta family,  Swiss immigrants but ethnically Italian. The building had once been Harry Hallett’s Portola Store in 1904 with a saloon added in 1908. The store survived Prohibition, and the saloon was revived as Art’s, a small grocery later replaced by the Village Square Market. 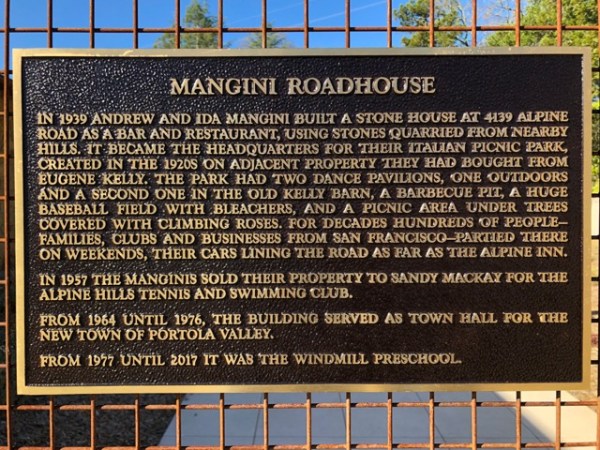 Just past the current group of stores is another vacant building, what used to be Jan’s Valley Inn. It was the Wayside before becoming Madeo’s Store through Prohibition. Transitioning to a bar, the establishment became a restaurant with a series of owners, including Terry Maloney when it was “Maloney’s in the Valley,” before Al Martin acquired it and named it for his wife, Jan.

These four roadhouses: Mama Garcia’s, Mangini’s/Rudy’s, the Portola Club, and Jan’s create what could be termed “Roadhouse Valley” (in addition to being Portola Valley). 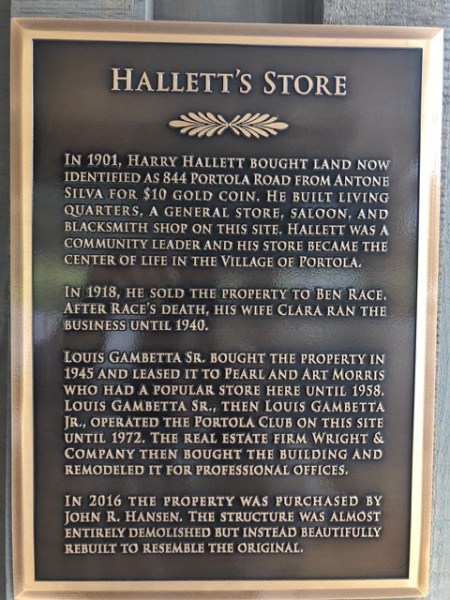 The town of Searsville had been the local village since the 1850s, complete with hotels, stores, saloons, blacksmith shops and homes. The town was bought out and replaced with a reservoir in 1881 to provide potable water for San Francisco. The enclave farther up the valley was known as Portola, perhaps in the erroneous belief that Gaspar de Portola had led his expedition through the area on its return by the coast to San Diego. Instead, Portola never got south of El Palo Alto. When scouts returned with information that the Bay was too big to circumnavigate, Portola led his command back the way they had come before following the coast southward.

The relocated Searsville residents and existing Portola residents were without a local store until wealthy San Francisco businessman Andrew Hallidie built an estate on the slope west of Portola Road. Hallidie had created the City’s cable car system. He saw to it that the Portola Village had a store, post office, school and so forth. After he died in 1900, the store soon closed until a new one was built in 1904 by Hallett, now rebuilt in the same location, called “The Portola.”

The four roadhouses on the Alpine-Portola road bend are all gone now. Portola incorporated in 1964 as Portola Valley, due to another town having been assigned the Portola name for its post office in 1910. That Portola is over 200 miles from San Francisco but even so, named itself after the 1909 Portola Festival in the City.

The first town hall of Portola Valley met in the stone building that was the Mangini Roadhouse that also held Rudy’s Alpine Inn in the 1950s. Only the fifth roadhouse, the Alpine Inn, built in 1852 as a card house (casa de tableta) remains.

The Palo Alto Historical Association (PAHA) is offering a webinar program entitled “Mama Garcia’s and ‘Roadhouse Valley’” on Sunday, April 11, at 2:00 pm via the webinar link.  The same instructions will be posted on the PAHA website. The presentation is open to the public and free, no password required. All you need is your computer screen for a window into the nearby past, geographically and temporally.

Author Bo Crane is a board member of both Palo Alto Stanford Heritage and the Menlo Park Historical Association.

Thank you so much for publishing my article! Wonderfully done and much appreciated. Regards, Bo

I was born in 1945 and remeber my parents ,Bert and Anna Keeble, taking the family there in the ‘50’s. I remember a “punch card” type game on the bar which I wasn’t allowed to play because I was told it was a “gambling device”. Thanks for the memories. Tom Keeble