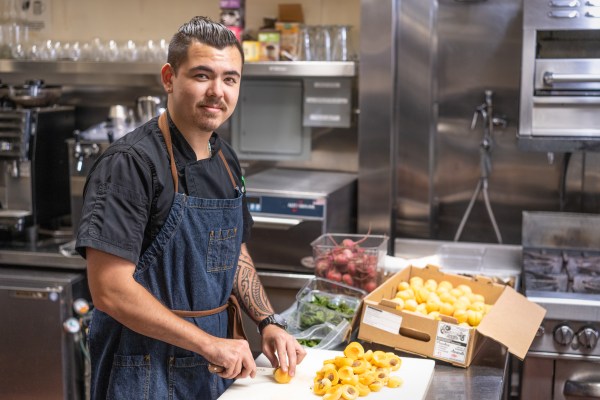 Bryan Thuerk was introduced to Flea Street on his 21st birthday. “My dad chose the restaurant, telling me ‘There is this place we want you to check out. They have their own garden,'” he recalls.

Today, Bryan is Flea Street’s Chef de Cuisine, a position he’s held for two years. The journey getting there wasn’t easy, he says.

He went to Oregon Coast Culinary School right out of high school but says “cooking didn’t come naturally to me. I really had to push myself.”

But thrive he did, joining their culinary competition team, earning three gold medals and an International Team Championship title in the Western Region ACF (American Culinary Federation) competition. Graduating from OCCI in 2017, Bryan earned his Associates of Science in Culinary Arts.

His next stop was working under Certified Master Chef Robert Mancuso at the Bohemian Grove in both Sonoma County and San Francisco.

“Chef excelled at making sure the food was done right,” he says. “Every one on the staff taught me how to excel. The kitchen was aggressive often serving 500 people a night.”

About working with Jesse Cool at Flea Street he says: “All of her hard work culminates in the continuation of her success. Forty years running a restaurant—that’s something. I’m here to support her.

“We bounce ideas off of each other. We’re in a good groove right now!”

The dinner enjoyed there recently with two friends attests to that collaboration. We all agreed every taste was delicious!