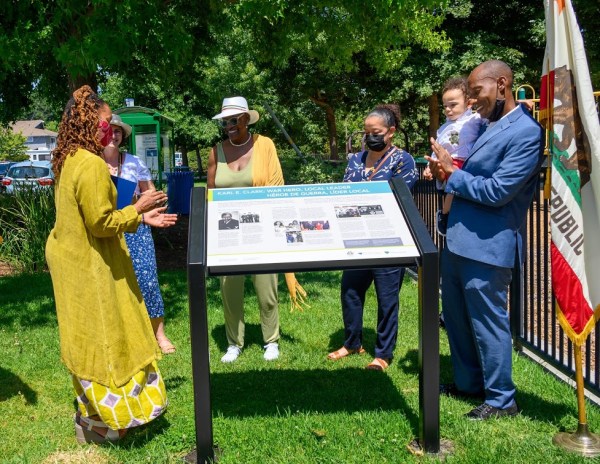 The unveiling of a storyboard June 19 describing the life of Karl E. Clark and his contributions to his country and his Menlo Park neighborhood won’t be the end to his story, speakers at the event said.

Rather, they expressed hope that Clark’s legacy will inspire current and future residents to continue the fight against racism and to invest their energy in improving the community.

During the ceremony in the park that was named in Clark’s honor in 2018, speakers shared stories of Clark’s accomplishments, kindness and positive attitude. They said it was fitting that the ceremony took place on the first Juneteenth to be observed as a federal holiday.

Juneteenth commemorates June 19, 1865, when word finally reached Texas that enslaved Black people were free. Although the Emancipation Proclamation had taken effect in 1863, it took considerable time for some Confederate states to implement it.

A hero in action 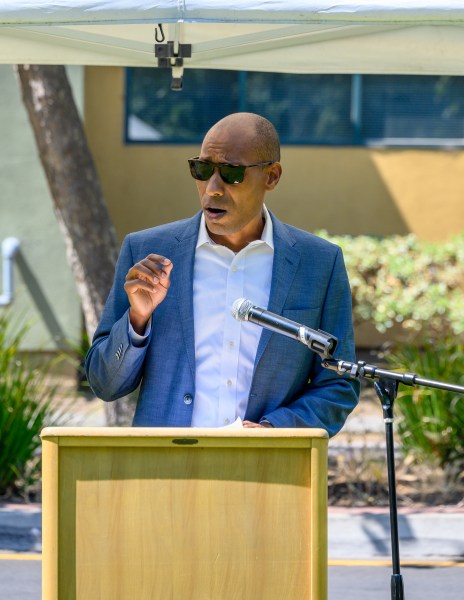 Clark, who moved to the Belle Haven neighborhood in 1954, served for 22 years in the U.S. Navy. He began as a mess attendant, noting in a memoir that it was one of the few positions open to Black soldiers at the time, and eventually reached the rank of chief petty officer.

He was serving on the USS Aaron Ward, leading an eight-man damage-control unit, when the destroyer was attacked by Japanese kamikaze planes near Okinawa on May 3, 1945. Though he sustained a broken collarbone, he rescued injured shipmates and carried them to the infirmary. He also single-handedly put out fires that threatened to destroy the ship. Although the ship’s captain acknowledged Clark’s heroics at the time, Clark said racism prevented the formal recognition of his heroics for 66 years. “It wouldn’t have looked good to say one Black man saved the ship,” Clark said in 2011.

In 2012, he received the Navy and Marine Corps Commendation Medal with the Combat Distinguishing Device, thanks to a push by U.S. Rep. Anna Eshoo and others to recognize Clark’s valor.

Mayor Drew Combs (pictured above, right) said the new designation of Juneteenth as a national holiday and the ceremony honoring Clark complemented each other. Combs said Juneteenth not only honors those who gained their freedom that day, but also the ancestors who died without receiving it.

“Mr. Clark is a modern-day local ancestor for this community,” Combs said, adding that Clark “always saw the good in people and in investing in this community.” 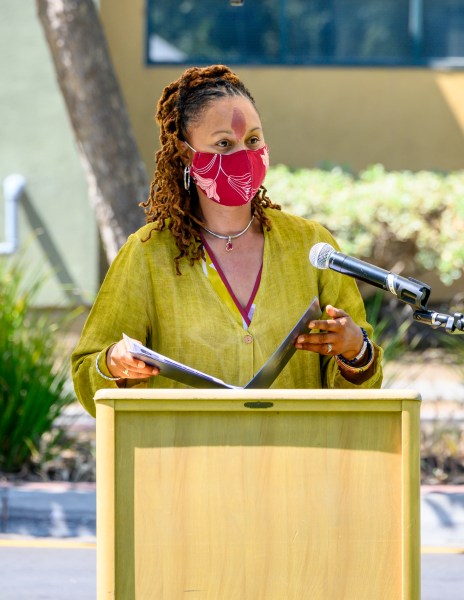 After moving to Belle Haven, Clark took part in a variety of community-building activities. He helped start a local Boys & Girls Club of the Peninsula, served as chair of the Bayshore Community Resource Center, was a member of the Knights of St. Peter Claver and worked as a mail carrier for 21 years.

He wrote four books about his experiences and co-authored a play about his life. The storyboard notes that he mentored countless young adults and children, many of whom returned to visit him over the years. Clark died in 2017 at the age of 100.

City council member Cecilia Taylor (pictured above right), who helped lead the 2018 effort to name the park at the intersection of Market Place and Hamilton Avenue in Clark’s honor, said her father had grown up across the street from Clark on Hollyburne Avenue and heard the stories of his accomplishments. She added that her grandfather had moved to Belle Haven at a time when it was the only housing area open to Black residents.

“I still feel the pain when I walk by my grandfather’s house,” Taylor said. “But love is what defines my freedom as we celebrate the Juneteenth holiday. We have to take the pain and turn it into beauty. It’s easy to hate and be angry. It’s harder to love.”

Noting Belle Haven’s three-sided geographical shape, Taylor said she considers it a “treasure triangle” that’s home to men and women like Clark who “lived in a system that didn’t want them – but this community did. The legacy of Mr. Clark is here.” 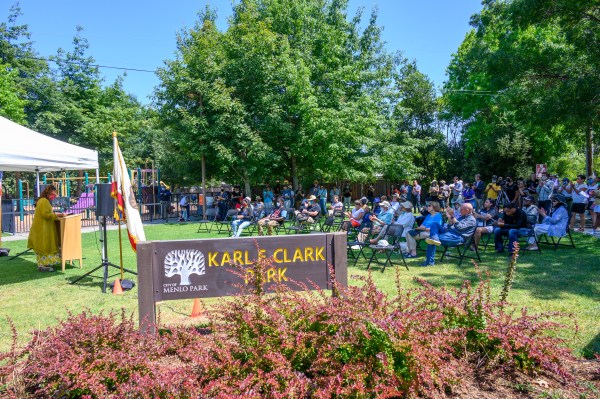 Additional speakers at the event included Father Lawrence Goode of St. Francis of Assisi in East Palo Alto, where Clark attended church; Tim Johnston, president of the Menlo Park Historical Association; and Konstance Kirkendoll, a teacher at Beechwood School, who read an excerpt from one of Clark’s books. Eshoo, the area’s Congressional representative, was unable to attend but sent a letter expressing her admiration for Clark.

Belle Haven Action, a community advocacy organization, helped lead the effort to install the storyboard at the park. The organization is led by Taylor, Annielka Perez and Julie Shanson.

Susan Erhart is the Editor of Belle Haven News where this post also appeared.