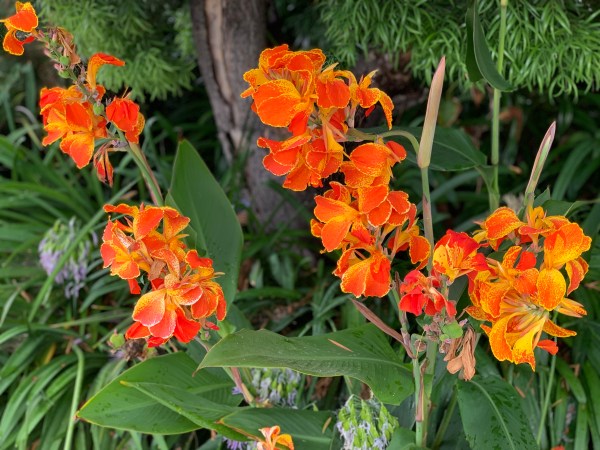 This fiery canna lily caught our attention the other morning on a walk downtown. Here’s the scoop about it, according to Wikipedia:

Canna indica, commonly known as Indian shot, African arrowroot, edible canna, purple arrowroot, and Sierra Leone arrowroot, is a plant species in the family Cannaceae. It is native to much of South America, Central America, the West Indies, and Mexico.

It is also naturalized in the southeastern United States (Florida, Texas, Louisiana, and South Carolina) and much of Europe, sub-Saharan Africa, Southeast Asia, and Oceania.

Canna indica has been a minor food crop cultivated by indigenous peoples of the Americas  for thousands of years.

I love cannas. Unfortunately most of mine have died over the years, and now I can’t plant anything new due to the drought.