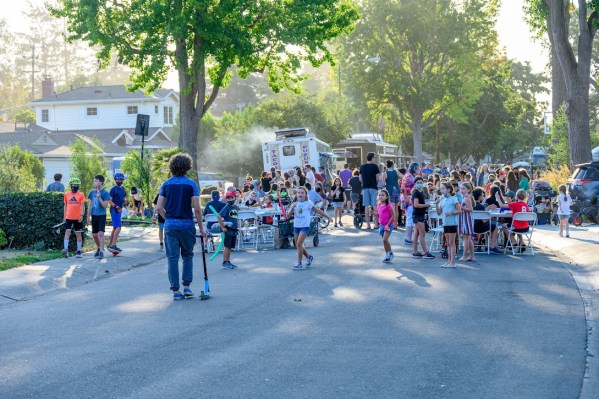 As always, the annual Suburban Park block party is a well-attended and popular neighborhood tradition. This year it featured a special twist. Here’s some background supplied by Renée Spooner, Suburban Park Board Member:

Suburban Park is a quintessential and iconic neighborhood in the City of Menlo Park. It was constructed during the late 40s using funds from the Veterans Administration bill after World War II. In the mid 1950s, Ronald and his wife, Shirley, moved their family into a home on Hedge Road. Older son Michael grew up to be a guitar player and singer, performing frequently in local clubs. Younger son, Patrick was a Troop 204 Boy Scout, managed a paper route and participated in Menlo-Atherton High School athletics on the cross-country, football, track, and wrestling teams. He attended Cañada and Menlo Colleges. 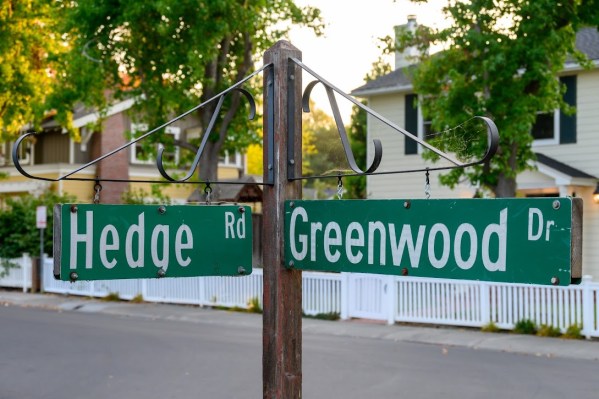 In the late 1950s, Ronald served as president of the Suburban Park Neighborhood Association Board, the longest-running neighborhood association in the state of California. As part of their contribution to the community, Ronald and Shirley designed, carved, constructed and installed the distinctive Suburban Park street signs. The first renditions featured the street names hand-carved into the wooden signs that were hung from metal scroll brackets and affixed to redwood posts. These unique signs lent to the historical charm and original close-knit neighborhood feel of our community. 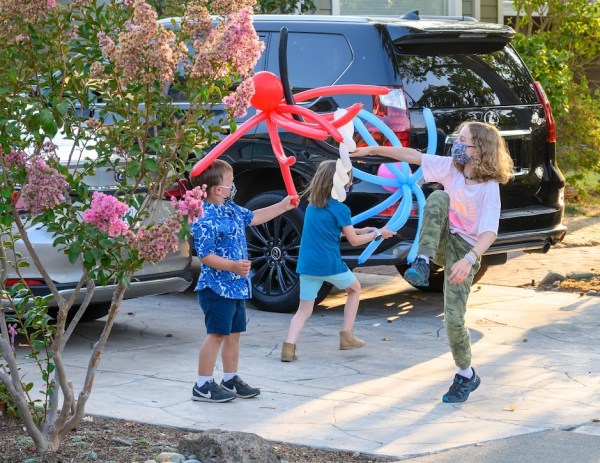 Fast forward to early August 2021, the Neighborhood Board distributed a flyer to all 244 houses in Suburban Park. In addition to requesting the annual $30 neighborhood dues, the flyer provided details about the annual Street Dance that was held on Saturday, August 28th. The flyer explained the differences in how we are offering a scaled-down “Street Dance Lite” to the residents this year. Catering trucks took the place of community barbecue and potluck; instead of the tables weighed down in homemade baked cakes, pies, and cookies, the Mister Softee ice cream truck was  on site with complimentary treats for the whole neighborhood; the balloon lady twisted her magic for the younger neighbors; and we’ll dance to music from a digital boombox versus a DJ. Instead of the popular cakewalk, neighbor Tony Nolasco’s Construction Group is sponsoring a birdhouse building workshop. 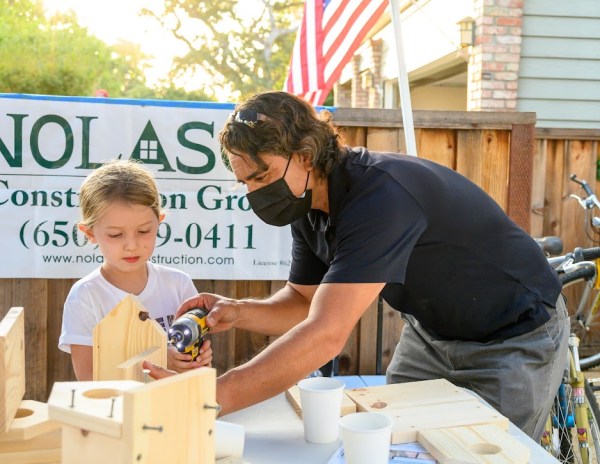 The Street Dance flyer also included an update about our street signs. It turns out that since originally being installed in the late 1960s by Ronald and Shirley, the signs have fallen into disrepair. The Board, not knowing of the street sign origins, inquired via several avenues with the City of Menlo Park to request that the signs be refurbished. Unfortunately, this request was declined with a statement that Suburban Park is the only Menlo Park neighborhood with distinctive signs, and therefore, municipal funds and labor cannot be allocated to restoring them.

In parallel, a Suburban Park resident teenage Boy Scout Henry Spooner was looking for an Eagle project to complete his rank requirements. He learned of the street sign dilemma and stepped up to tackle the refurbishment task. This idea was communicated to several neighbors, the Board, and his troop 222 Scoutmaster. The Scout has received provisional approval to move forward with the street sign restoration project. 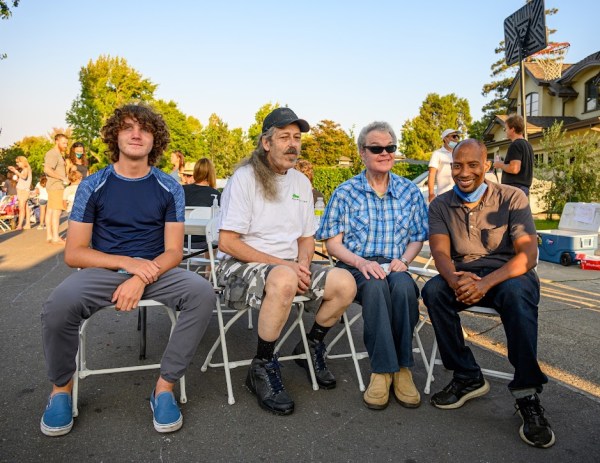 From the flyer, Ronald and Shirley’s sons — Michael and Patrick (pictured with Mayor Drew Combs and Henry Spooner) — became aware of the street sign update. Patrick paid their dues, and, in a handwritten letter indicated his family’s historical connection to the street sign project. In it he wrote, “I would love the opportunity to talk with the people who are pursuing the restoration project. Perhaps I can help.”

Henry and his mom spoke with Patrick and learned that the brothers last came to the Street Dance in 1974. And now, 47 years later, with Henry’s encouragement, Michael and Patrick attended this year’s Street Dance. Patrick and the Henry will continue to meet to discuss the restoration and refurbishment of the street signs that were originally designed, constructed, and installed so long ago by his parents.

Thank you for publishing this sweet story about our wonderful neighborhood. My husband and I bought our first home here 42 years ago and we have been so lucky to be a part of it’s history and it’s unique traditions nearly every year. There are so many more stories that can be told. And even more memories to share as we watched our children and those of others grow. Also, it’s worth noting that Suburban Park has the longest running homeowners association in the State of California!